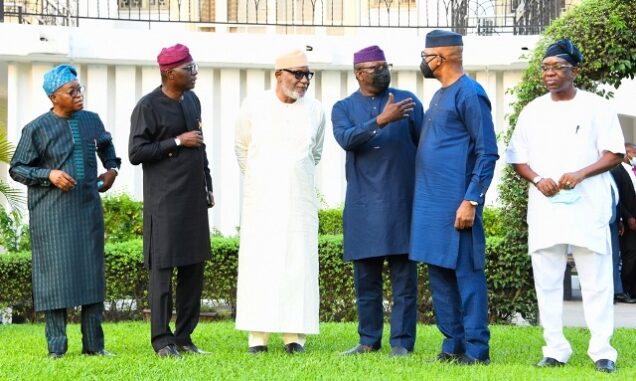 Southwest Governors on Tuesday met behind ‘closed door’ in Lagos to discuss critical issues bordering on security and how to move the region forward.

The meeting was held at the Lagos House, Marina, Lagos Island.

Chairman, Southwest Governors’ Forum, Rotimi Akeredolu refused to give details of what was discussed at the meeting in a chat with newsmen.

He said the governors discussed issues common to the region and national.

Akeredolu added that issues around the Oodua Group of companies were discussed as well as security issues, but refused to explain further.

“As you can see, six governors of the Southwest, under the Southwest governors Forum met today and deliberated on a number of issues, both issues we have in common and national issues.

“A number of them that have to do with security is not what we can discuss in the open, so I want to thank you,” he said.