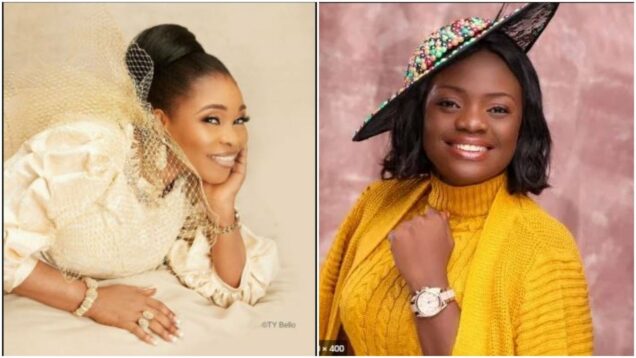 Gospel artiste Adeyinka Alaseyori has taken to social media to celebrate her colleague, Tope Alabi as she turns 51 today, Oct 27, 2021.

Alaseyori in a message she penned down on her Instagram page to celebrate the ace gospel singer, thanked her for ‘breaking limits and boundaries’.

She wrote: “Thank you for breaking limits and boundaries.
Thank you for making it possible for most of us to dream.
Thanks for holding on strong.
Thank you for being all that God has called you to be.
A very happy birthday to you ma’am.
The best of your days have just begun ma. Congratulations momma😍.
Cc: @tope_alabi_”

Alabi had in a video which made rounds on the Nigerian digital space, claimed Alaseyori released the song without consulting the holy spirit.

Alabi said Oniduro mi, which exalts God as the sole guarantor and one who never forsakes His own, is not a proper name to give God.

However, Alaseyori also gave her own response to the criticism by performing the song again on her Instagram live amid reactions on social media.

She did not make any direct comments on the viral criticism of Tope Alabi, she instead seized the opportunity to praise her husband for being a gentleman.

Alaseyori also thanked her fans for their numerous support, stating she has been cautioned not to make comments on the controversy.