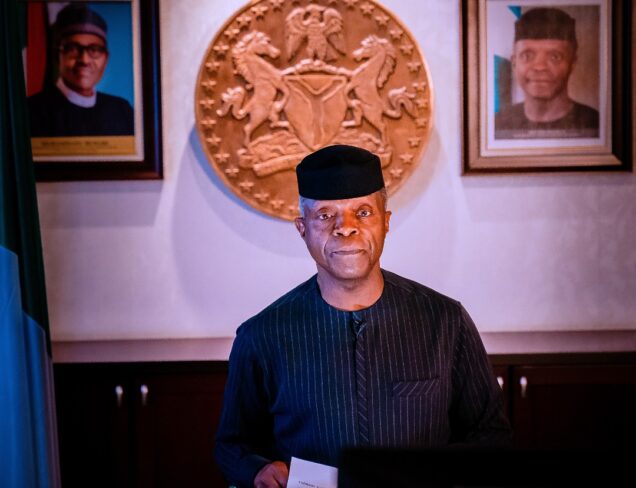 The African Development Bank, AfDB, has backed Nigeria’s advocacy questioning the planned defunding of gas projects as one of the moves towards achieving net-zero emissions.

AfDB threw  its weight behind the clamour during a meeting between Nigeria’s Vice President, Prof. Yemi Osinbajo, SAN, and a delegation of the bank.

The Vice President for Power, Energy, Climate and Green Growth at the African Development Bank, Mr. Kevin Kariuki, had led a delegation to pay the VP a visit and expressed the bank’s commitment and support for a just energy transition.

His words: “First thing I would like to mention is that you have inspired us a lot in the recent past, through your strong and very well-articulated position on the issue of gas as far as Nigeria and Africa is concerned.

“You clearly stated that gas must be seen to be a transitional fuel for Africa, which is a position that our bank also supports because we do understand that Africa needs to increase its energy access, and you can’t increase energy access without utilizing some of the resources and energy sources that we have. I believe that this position you have taken was also supported and stated by the Bank’s president (Mr. Akinwunmi Adesina) during the ministerial retreat.”

Prof. Osinbajo has, in recent times, advocated for a just transition to global net-zero emissions, particularly calling on multilateral agencies, and western countries to stop the planned defunding of gas projects in developing countries.

At different national and international forums, including recent meetings with a delegation of the European Union (EU), at the Africa Regional Heads of Government Commonwealth Roundtable, and also at different meetings in London at the High-Level United Nations event on the Energy Transition plan in Africa, among others, Prof. Osinbajo had maintained a firm stand against ending investments in gas projects in developing countries during the transition period.

Speaking at the meeting, Prof Osinbajo said, “we are looking at commercial options and climate finance facility is one that we are trying to pay attention to.”

On Nigeria’s energy transition plan, the VP disclosed that one of the components in the plan included “the use of renewables and bringing that into the general stream of things that we are doing. We have a #SolarPowerNaija project, where we are hoping to connect 5 million homes with solar power, which is part of our Economic Sustainability Plan.”

The Vice President welcomed AfDB’s support and stated that “we look forward to doing far more in the power sector and hope that we would be able to get your (AfDB) support going forward. We know that there are quite a few things that the bank has put resources into.

“Thank you very much for the great support we get from AfDB and also for your willingness and readiness at all times.”

Earlier, Kariuki mentioned that at COP26, the AfDB would “be making a strong pitch to developed countries to fulfill their promise of the $100billion per year” that ought to have started in 2020, “because the significance is that today, even if we wanted to address the climate challenge, we really cannot do so because the issue of climate finance needs to be addressed in a big way.”

In another development, a number of US-based experienced clean energy policy researchers have argued that “the blunt exclusion of all non-renewable energy projects from development finance is an inequitable and ineffective climate strategy that gaslights over 1 billion Africans.”

In a recent article titled “Why banning financing for fossil fuel projects in Africa isn’t a climate solution,” scholars Benjamin Attia and Morgan Brazilian from the US Payne Institute submitted that “when it comes to carbon dioxide emissions, sub-Saharan Africa is collectively responsible for barely half a percent of all global emissions over time, while the US, UK, EU, Japan and Russia are responsible for more than 100 times that amount, or about 57%.”

The experts referred to Prof. Osinbajo’s advocacy on the issue. “Nigerian Vice President Yemi Osinbajo recently described “energy transition” as “a curious term” when applied universally, given the energy shortfalls in countries like Nigeria. He has argued for an energy transition in which Africa can develop quickly and grow.”

They noted that indeed “increasing electricity in industrializing regions of sub-Saharan Africa would first power income-generating activities and public services, both drivers of economic growth.”

The US experts concluded that “equitable and effective climate negotiations will require nuanced policy considerations that balance the priorities of alleviating energy poverty with urgent climate change mitigation and adaptation. A just energy transition would leave African governments to make and implement policies and deliver on their own national climate commitments under the Paris Agreement rather than shouldering the West.”