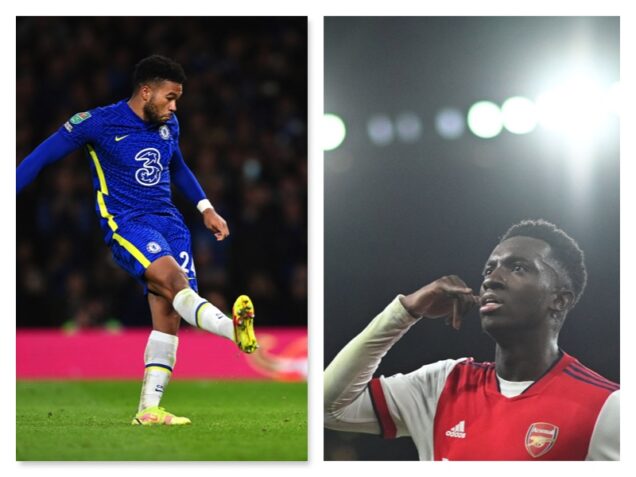 Arsenal and Chelsea moved into the 2021/2022 League Cup quarter-finals on Tuesday, with Chelsea needing penalty kicks to knock out Southampton.

They eased through with second-half goals from Calum Chambers and Eddie Nketiah in a 2-0 win over struggling Leeds United.

Chambers opened the scoring in the 55th minute, 23 seconds after coming on as a substitute.

The defender’s header looked to have been saved by Illan Meslier but goal-line technology ruled that the ball had crossed the line.

The Gunners’ second goal came in the 69th minute from a poor header back by Liam Cooper.

Chelsea needed Reece James, the wing-back to secure yet another victory on Tuesday in the Carabao Cup.

Once more without the injured strike duo of Romelu Lukaku and Timo Werner, Chelsea went ahead through Kai Havertz, but Che Adams hit back early in the second half.

Kepa Arrizabalaga and Fraser Forster both then saved a penalty kick each in the shootout, yet it was ultimately Will Smallbone’s miss that proved costly as the five-time winners progressed.

Chelsea had set the tone when Ross Barkley delivered a teasing corner kick from which Saul Niguez forced Forster into a fine stop in the sixth minute.

Havertz twice went close before he punctured Southampton’s resolve on the cusp of half-time when a defensive lapse allowed the Germany international to head home Hakim Ziyech’s corner-kick.

That lead lasted only two minutes into the second half, however.

Malang Sarr’s error was pounced upon by Kyle Walker-Peters, whose strike squirmed beyond Kepa and into the path of Adams for a tap-in.

Where Kepa failed at one end, Forster succeeded at the other, preventing Havertz from immediately restoring Chelsea’s lead.

Both goalkeepers had to be at their best in stoppage time to force penalties, Kepa saving from Lyanco and Mohammed Salisu before Forster kept out Sarr’s effort.

Then, Kepa tipped Theo Walcott’s penalty kick onto the post before Forster denied Mason Mount to cancel out Chelsea’s advantage, only for Smallbone to blaze his penalty kick over.

This left James with the honour of coolly settling matters again.

In the third game of the day, Sunderland edged out Queens Park Rangers via penalties. The match had ended 0-0 at full time.