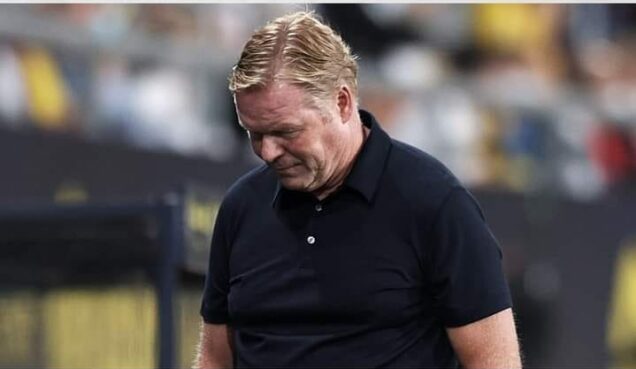 Barcelona have finally sacked their under performing manager Ronald Koeman after a series of disastrous results.

The latest was Barcelona losing 0-1 to Rayo Vallecano in La Liga on Wednesday night.

This followed their 1-2 loss to arch rivals Real Madrid at the weekend.

A short statement from Barcelona on Wednesday night read: ‘FC Barcelona have relieved Ronald Koeman of his duties as first team coach.

‘The president of the club, Joan Laporta, informed him of the decision after the defeat against Rayo Vallecano.

“Ronald Koeman will say goodbye to the squad on Thursday at the Ciutat Esportiva.

‘FC Barcelona wishes to thank him for his service to the Club and wishes him all the best in his professional career.’

Barca have won just four of their opening 10 games in La Liga.

The Spanish club are also struggling in the Champions League group stage as they were beaten by Bayern Munich and Benfica before they secured a 1-0 win over Dynamo Kyiv last week.

Reports said former Barca captain Xavi is one of three candidates in the frame to replace Koeman.

Barjuan may be asked to serve as an interim coach.