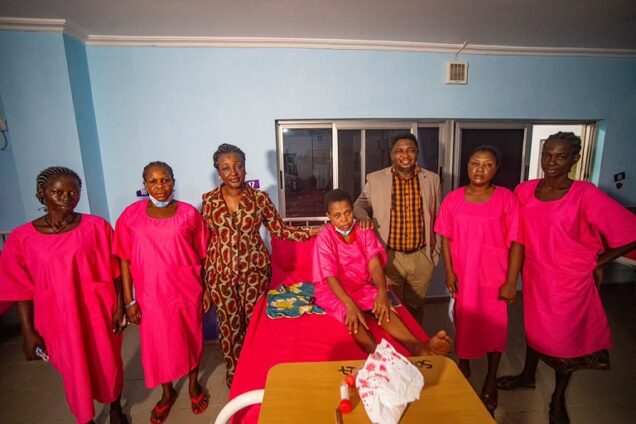 First Lady of Edo, Mrs Betsy Obaseki (third from left) and the first set of beneficiaries of the restorative surgeries at the Vesicovaginal Fistula Clinic she set up in Edo

The Vesicovaginal Fistula Clinic set up by the wife of Edo State Governor, Mrs. Betsy Obaseki, has successfully carried out free restorative surgeries for its first set of patients.

The VVF Clinic is located inside the Stella Obasanjo Hospital, in Benin City, the State capital.

Mrs. Obaseki expressed joy and fulfillment over the restored dignity of the women.

She invited other VVF sufferers within and outside Edo State to avail themselves of the professional treatment and care at the Edo VVF Center.

The VVF specialist in charge of the Clinic, Professor Ileogben Adeoye, said that the joy derived from experiencing the restoration of one’s health cannot be equated with money.

Adeoye also took the opportunity to beckon on women who need to undergo such surgeries within and outside the State to come forward.

The beneficiaries of the free surgery who met with the Edo First Lady, expressed immense gratitude for a second chance to live a healthy and normal life.

Narrating how she became a victim of VVF, one of the patients, Mrs. Angela Omoregie, said she had patronized a nurse while in labor, who mutilated her and in an attempt to salvage the situation, she visited a private hospital where matters were made worse, leaving her excreting through her vagina.

Mrs. Omoregie expressed gratitude to God and the Mrs. Obaseki for the hope and healing brought about by the initiative.

On her part, Mrs. Beauty Famous said she went against professional advise, rejected a cesarean session and unfortunately lost her baby and suffered urinary incontinence for two years, while struggling to raise N400,000 for corrective surgery.

Mrs. Famous who thanked the Mrs. Betsy Obaseki Initiative for coming to her rescue with the free surgery at the VVF Clinic, advised that pregnant women learn from her experience and take heed to doctors’ recommendation.

Mrs. Omosivie Gladys who also became a VVF patient due to surgical errors, confessed to have undergone this repair surgery twice which had both failed, but this time, she confirmed the success of the repair.

She did not spare words of gratitude to the Edo First Lady for coming to her aid when there was no other way to afford a third surgery.