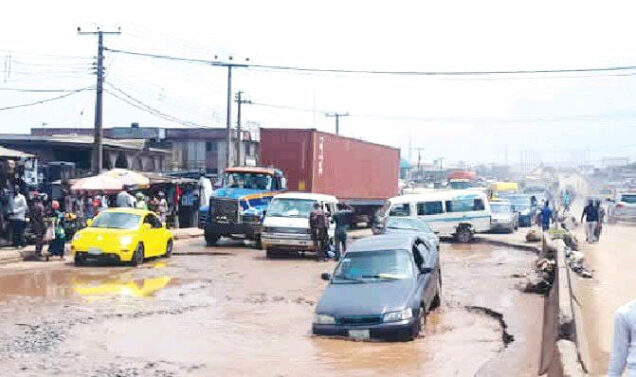 Members of the Nigeria Labour Congress (NLC) Ogun and Lagos chapters, on Wednesday in Sango-Ota, blocked the Lagos-Abeokuta expressway over its deplorable state after empty promises to fix it.

The protesters carried placards with inscriptions: “we don’t want palliatives”, “we want good roads”, “Dapo Abiodun save our souls from bad roads”, “we are not slaves in our country”.

The NLC Chairman in Ogun, Mr Emmanuel Bankole, said that the NLC was not happy with the condition of portions of the Lagos-Abeokuta and its environs.

“We will not allow anybody to take away our right.

“In times like this, we do not have any option than to express our displeasure with government,” he said.

The chairman said that the 21-day ultimatum given by NLC after the visit of Minister of Works and Housing, Babatunde Fashola to Sango-Ota, had lapsed.

Bankole said that Fashola promised to commence palliative work on the road but nothing much had been done since then.

“We deserve better than what we have seen today. What we see today is below our expectations,” he said.

The NLC Chairman in Lagos State, Mrs Funmi Sessi also said, “we believe in action and the time for talking is gone. There is an urgent need to ameliorate the sufferings of the masses.”

Sessi said that the action was long overdue as people were inflicted with serious pains, following the deplorable condition of the Sango-Ota portion of the Lagos-Abeokuta expressway.

She said that members of the Lagos chapter of NLC came to partner with its colleagues in Ogun in the struggle to ensure that good roads were delivered to the people of the state.