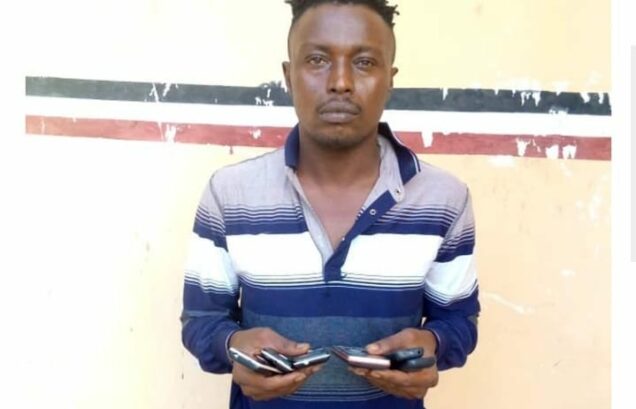 The 37-year-old suspect, with the nickname Pastor, specialises in withdrawing money from victims’ bank accounts after stealing their phones.

The suspect, who claimed to be a resident of Opaleye Street, Mile 2, Lagos was picked up by the crack team of detectives of the NSCDC at his hideout on Offa Road in Ilorin.

Two other suspects were arrested with him.

Spokesman of the Defence Corps, Babawale Zaid Afolabi, said in Ilorin on Tuesday it received a missing phone complaint from 57 year-old Buraimoh Sunmonu Adebayo, who lives on Lagos Road, Sawmill area of Ilorin.

Adebayo claimed that he lost his phone when he boarded a tricycle from Ilorin Grammar School to Taiwo Road in Ilorin metropolis.

“The complainant realised that after a few hours of losing his phone, a sum of N500,000 had been withdrawn from his personal and company’s accounts where he is one of the signatories.

“Our detectives and tactical team later swung into action and tracked down the suspect at his hideout at Offa Road, Ilorin on Monday where he was rounded up along with two of his accomplices,” the spokesman stated.

He said the suspect, in his confessional statement, admitted to be an internet fraudster and also confessed to have stolen Adebayo’s phone.

The suspect further “confessed that he had so far withdrawn the sum of N400,000 from two bank accounts of the complainant and not N500,000 as claimed by the complainant.”

Two other accomplices picked up at the hideout were Alfred Adegoke (34) and Yusuf Saman (30).

Items recovered from them at the hideout included 13 mobile phones and some substances suspected to be hard drugs.

The Commandant of the command, Iskil Ayinla Makinde has ordered full scale investigations into the matter and the suspects will be charged to court after completion of investigations.