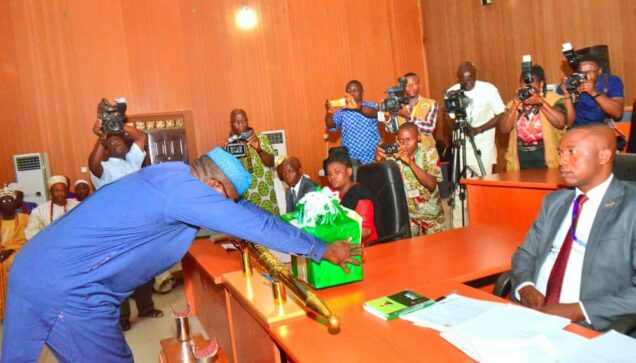 Gov. Kayode Fayemi of Ekiti has presented a budget of N100.8 billion for 2022, to the state House of Assembly for consideration.

Fayemi presented the budget called “Budget of Legacy and Consolidation” at Thursday’s plenary presided over by Speaker Funminiyi Afuye in Ado-Ekiti.

“The primary objective of the 2022 budget is to complete and consolidate on all our legacy projects and lay a solid foundation for the incoming government.

“We will focus on projects that will fast track the economic growth of the state.

“We intend to improve on our Internally Generated Revenue(IGR) by blocking loopholes and identifying new sources of revenue generation, thereby reducing our dependent on the monthly federal allocation,” the governor said.

Fayemi said that the budget was based on the economic realities in the country and the world in general.

Fayemi, who reiterated the commitment of his administration to the welfare of workers, said that the budget has provision for the clearing of backlogs of unpaid salaries.

He said that the budget would also ensure prompt payment of pensions and gratuities to retired workers.

He disclosed that more than 2,000,000 people were expected to be vaccinated against COVID-19 before the middle of 2022 as captured in the budget.

He lauded the lawmakers for their usual cooperation, urging them to speedily consider the budget.

In his address, Afuye, promised continued support of the House to the governor towards the development of the state.

Afuye assured that the House would work assiduously on the budget to ensure its passage before the end of 2021.

Dignitaries at the event included the Secretary to the State Government, Mr Abiodun Oyebanji, representatives of traditional rulers led by Oba Gabriel Adejuwon, the Onisan of Isan-Ekiti of Oye, market women and top government functionaries.