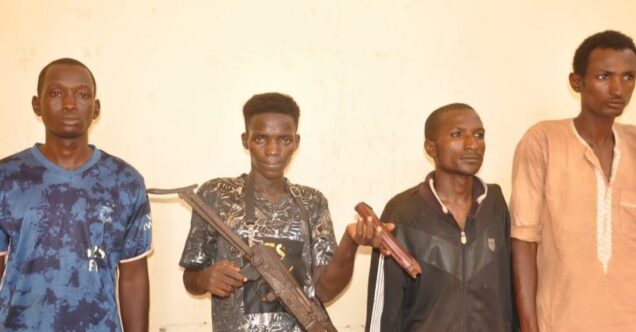 Just for illustration. These four suspect kidnappers were nabbed in Adamawa

Ekiti State Police Command said a joint security team has arrested four suspects in connection with a recent abduction in the state.

ASP Sunday Abutu, the command’s Spokesperson, confirmed the arrests, saying that the efforts of the joint security team have started yielding positive results.

A few days ago, five commuters were abducted along Ayedun-Ilasa-Ayebode road in the Ikole local government area of the State.

The incident led to a gun duel between soldiers and the suspected kidnappers, causing motorists to desert the usually-busy road.

According to the Police Command, persistent pressure by the combined security team resulted in the release of the five commuters.

“The suspects arrested have since been moved to the State Police Headquarters for further interrogation and investigation while the joint operation for the rescue of the victims continues.

Abutu said the command had deployed a tactical team that comprises the Rapid Response Squad (RRS), the Anti kidnapping Squad, the Safer Highway, the SIB, the Military, the NSCDC, the Amotekun and the local hunters to rescue the victims and apprehend the perpetrators,” he said.

“This joint operation has yielded positive results as four suspects have been arrested so far in connection with the abduction.

“We implore members of the public to supply necessary and timely information to assist the police in its operations,” Abutu added.