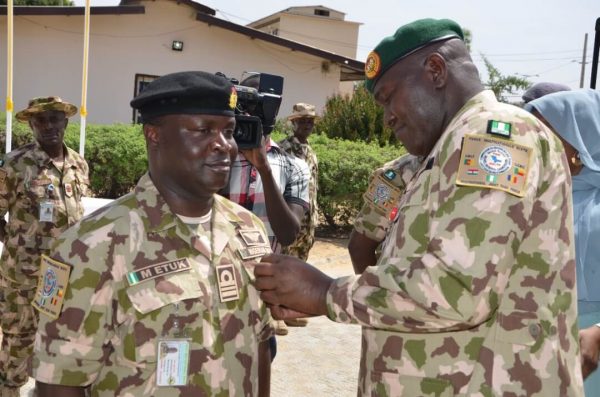 The Headquarters, Multinational Joint Taskforce (MNJTF) has honoured 24 military staff officers (MSOs) from the Republic of Benin, Nigeria and Chad with MNJTF medals and Operation YANCIN TAFKI Medal in recognition of their meritorious service for peace and security in the Lake Chad region.

The Chief Military Public Information for MNJTF, Col. Muhammad Dole, disclosed this in a statement on Wednesday in N’Djamena Chad.

Dole said the officers were decorated at a colourful medal parade ceremony for the outgoing MSOs who have completed one year tour of duty.

The Force Commander, MNJTF, Maj.-Gen. Abdul-Khalifah Ibrahim said the award of medals had remained one of the most cherished and sacred traditions of the military in recognition of bravery or gallantry, heroism, or meritorious service.

Ibrahim said MNJTF was re-operationalised in 2015 to tackle the insurgency in the Lake Chad Basin region and restore normalcy to the affected communities.

He added that since its inception the force had conducted operations and undertook other non-kinetic activities towards the achievement of its mandate.

According to him, these operations and activities, which are coordinated at MNJTF Headquarters by MSOs, have yielded many successes including the liberation of communities previously held by the terrorists, rescue of thousands of captives, neutralisation of countless insurgents.

He said the operations had also led to the resettlement of thousands of refugees and internally displaced persons back to Banki town, Baga and Doron Baga in Nigeria; Amchide and Kolofata in Cameroon; and Baroua in the Niger Republic among others.

The commander disclosed that there had not been a record of mistreatment of the surrendering Boko Haram/ISWAP insurgents by MNJTF troops, saying the ongoing mass surrender of terrorists were being handled professionally.

He also confirmed the killing of key BHT/ISWAP leaders; Abu Musab Al-Barnawi and Mallam Bako and gave assurance that MNJTF troops would go after any successor as well as the terrorists` groups as a whole.

Ibrahim however, called on the remaining BHT/ISWAP criminals to embrace the path of peace, by dropping their arms and surrender to security forces.

He commended the Republic of Chad for being a good host to the MNJTF as well as playing a brotherly role to its neighbours.

In his remarks, the Chadian Chief of Defence Staff (CDS), Lt.-Gen. Abakar Daoud, represented by Maj.-Gen. G Mandjita congratulated the recipients for their excellent performance to merit the award of the MNJTF Medal.

Daoud commended the commander for the great work of ensuring the return of normalcy in the region, thus creating necessary conditions for relocation and resettlement of affected communities.

He assured MNJTF of continuous safety, security and a conducive working environment for its operatives.