Rivers housewife explains why she killed husband with cutlass 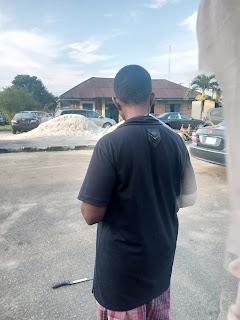 Mrs Gladys Napoleon, a housewife in Chokocho community, Etche LGA of Rivers explains why she killed her husband, Amadi with a cutlass.

Mrs Gladys Napoleon a housewife in Chokocho community, Etche Local Government Area of Rivers State has explained why she killed her husband of 35 years, Amadi with a cutlass.

She spoke during her parade by the Rivers Police Command in Port Harcourt on Wednesday.

Mrs Napoleon said her action was a self defense as the victim wanted to also kill her with the machete after a little argument between them.

The suspect added that after the cutlass injuries, her husband was rushed to two hospitals in Igwuruta with the help of his brothers and some policemen on duty at the checkpoint, but he bled to death.

The suspect said she raised an alarm during the argument that led to the unfortunate incident, but no one responded.

The 51- year- old woman told journalists that her husband had threatened to kill her and her two children for ritual purposes.

Gladys told journalists that her marriage of over 35 years produced six children, but she lost four of them and she is now left with just the two girls

She revealed that she had consistently complained to the family members of her late husband about maltreatment and physical abuse he constantly meted to her to no avail.

While parading the suspect, Rivers police spokesperson, Mr Nnamdi Omoni, told journalists that suspect who admitted that she murdered her husband with a machete was arrested on the 8th of October.

Omoni said preliminary investigation revealed that the suspect after using the machete on the husband’s head washed away the blood stain on it .

He added that Napoleon had identified the cutlass she used during the fight and will be charged to Court after proper investigation.

Omoni also cautioned couples and members of the public to use alternative means for resolution of conflicts rather than resort to self-help and violence.