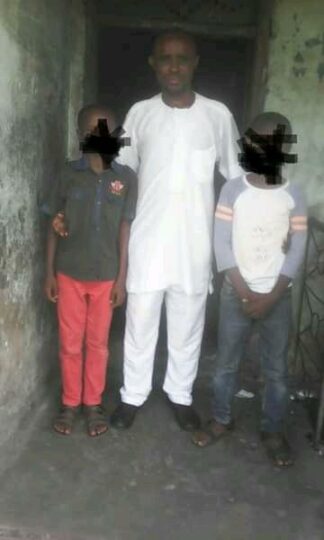 Prince Wiro, National Coordinator of Centre For Basic Rights And Accountability Campaign with two out of the four children allegedly harassed sexually by suspected homosexual, Ekpeye

The trial of a 27- year – old suspected homosexual, simply known Ekpeye accused of sexually molesting three boys suffered setback in a Port Harcourt Magistrate Court on Thursday as a result of the conference of the Nigeria Bar Association.

The trial of the suspect who was accused of sexually molesting three boys aged 9,11 and 12 years will now commence from next week’s Monday, November 1,2021 .

Our correspondent gathered from police sources that one more male teenager had voluntarily confessed to the Police that the suspect also allegedly sexually assaulted him, thus, increasing the number of alleged victims of the suspect to four from initial three.

Also, it was found out that the suspect was in possession of a bottle of the cream he allegedly used as lubricant he used for fondling and and caressing the private parts and buttocks of his underage male victims the night he was caught.

A human rights group, Centre for Basic Rights Protection And Accountability Campaign championing the prosecution of case has vowed to follow up the matter in court until justice is dispensed.

Meanwhile,the Divisional Officers of Azikiwe Police Division, Ilabouchi Mile 2 Diobu, Port Harcourt, has warned that the Police will arrest any parent who fail to bring his child to court on Monday November 1,2021 when the suspect will be arraigned.

The 27-year-old suspect was arrested for allegedly fondling the private parts of three boys aged nine,eleven and twelve, on Ekwulobia Street in Mile 3, Diobu area of Port Harcourt in Rivers State capital.

The suspect, identified only as Ekpeye, had allegedly walked into a group of children who were playing and started asking for their names before fondling, kissing and smooching them in their private parts.