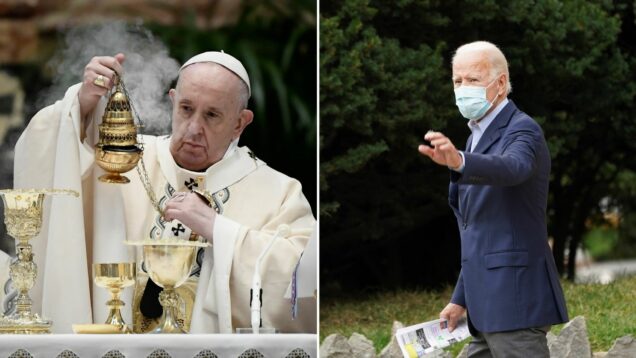 As world leaders flock to Rome for the G20 summit, US President Joe Biden was set Friday to meet Pope Francis and France’s Emmanuel Macron at the start of a trip aimed at reasserting US international credentials.

Shortly before leaving Washington, the president unveiled a “historic” blueprint for remaking America’s economy, but it remains to be seen if he can persuade lawmakers to back it.

After weeks of internal party feuding, and with his personal ratings slumping, Biden had hoped to arrive at twin summits in Europe this week — the G20 and UN climate talks in Glasgow — with the deal in hand.

The 78-year-old sees himself as the spokesman for democracy in the face of authoritarian regimes, notably China — although Xi Jinping, like Russia’s Vladimir Putin, is not attending the G20 in person.

The president opens the trip on a more intimate note. After landing overnight, he has a lunchtime meeting with Pope Francis, the head of the world’s 1.3 billion Catholics.

They have met three times already, but this is their first tete-a-tete since Biden was elected.

Only the second-ever Catholic president, Biden attends mass regularly and is open about his faith and how it has helped him through a series of family bereavements.

The White House said it expects the meeting to be “warm”, and certainly, Biden and the pope share a range of concerns, from poverty to climate change and the coronavirus pandemic.

But the question is whether either leader raises the red-button issue of abortion. Biden supports the right to choose, while Francis, 84, has slammed terminating pregnancies as “murder”.

The pontiff has nonetheless distanced himself from a push by conservative US bishops to deny communion to politicians supportive of abortion rights — which would include Biden.

The meeting will be behind closed doors and the Vatican abruptly canceled a live camera feed, to protests from journalists. It was also canceled for an earlier meeting between Francis and South Korean President Moon Jae-in.