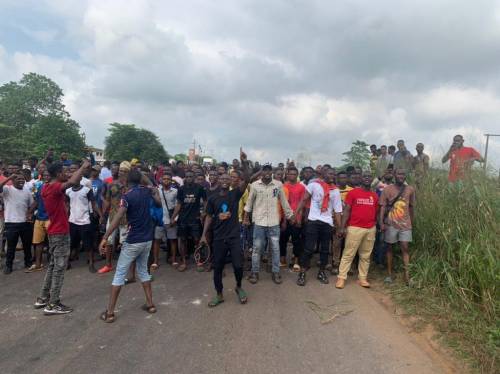 The students of Tai Solarin University of Education (TASUED) on Friday protested against the arrest and detention of their Students Union President, Sodiq Ridwan by men of the Nigerian Army.

Ridwan was arrested on Thursday after he intervened in a matter involving students and soldiers.

Trouble reportedly started after soldiers attached to the Ilese barrack were said to have stopped some students riding in their cars to check their phones.

This reportedly led to an altercation between the students and the military men on Thursday.

As the situation heated up, the SUG President was said to have arrived at the scene to wade into the matter, but he was arrested with other students.

On Friday morning, students took to the street to protest what they called “illegal arrest and detention” of their colleagues.

One of the student leaders said, “A few hours ago, uniformed men of Nigerian Military invaded the students’ community of our dear University and melted absolute injustice, extortion, and assaults on peace-loving students.

“TASUEDITES who are going by their legitimate and calm businesses were cornered at CONOIL Filling Station, the Express Road that leads to the university’s second gate. They were arrested and assaulted for no reason. To make things worse, the soldiers asked students to bail themselves with N50, 000 and those who could not do that were detained and taken away (most likely to the barracks).

“The Senate President was also severely injured and many comrades were beaten, whipped and abducted by the military men. The Students’ Union abhors this act in its totality, very displeased, and frowns on the reaction of the custodian of the university to the matter when contacted.

“As at the time of making this statement, the President of the Union was still in the custody of the military men. Very assertively, the Students’ Union has declared lecture and exam free day tomorrow, Friday, October 29, 2021, to press home this unjust exploitation and assault. This is a total embarrassment and threat on our university community as a whole, and we will not let it go unchecked.”

However, the Vice-Chancellor of Tai Solarin University, Ijagun, Ogun State, Prof Wole Banjo, visited the barracks of the Nigerian Army in Ilese on Friday.

The VC said he was yet to know why the students were arrested by the soldiers.

He said: “I’m still at the barracks this morning, I just want to see those students that were arrested. So, immediately after seeing them maybe, I will call you back to give you the full details.

“We closed normally from the office without any issue yesterday, there was no security problem on the campus. We don’t even have any issues with the students. So, it was later in the day that we learned that soldiers arrested some of the students.

“We are here at the barracks to find out exactly what happened. We are not relying on hearsays – what the students said and what anybody is talking about. We are here now to hear from the military officers what actually happened. After listening to them, we would be able to intervene in the matter. Those arrested are still with the military. We are making moves to get them released.”