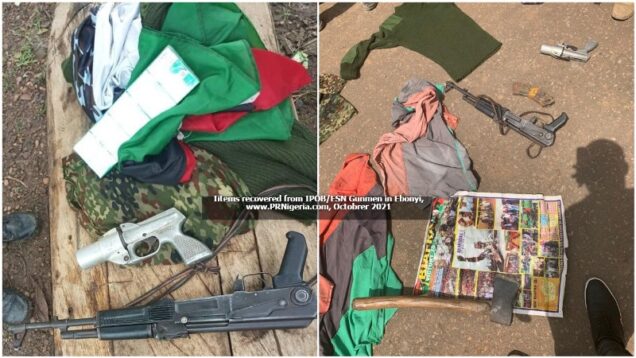 In a report, PRNigeria said that the IPOB/ESN camps, located at Ochokwu Village in Ikwo Local Government Area of Ebonyi State were raided by the troops during a clearance operation.

“During the operation, troops exchanged fire with the gunmen occupying the camps.

“They, however, subdued the IPOB militants, compelling them to escape with gunshot injuries.”

Items recovered in the camps include some AK-47 rifles, rounds of 7.62 mm ammunition, Rifle Magazines, and Biafra flags, among other items, according to the source.

Also, four IPOB militants, who attacked a team of Police and DSS personnel at Ukwulobia, in Anambra, were also killed at Nnobi area of State.

Three vehicles, arms and ammunition were recovered from the IPOB militants.