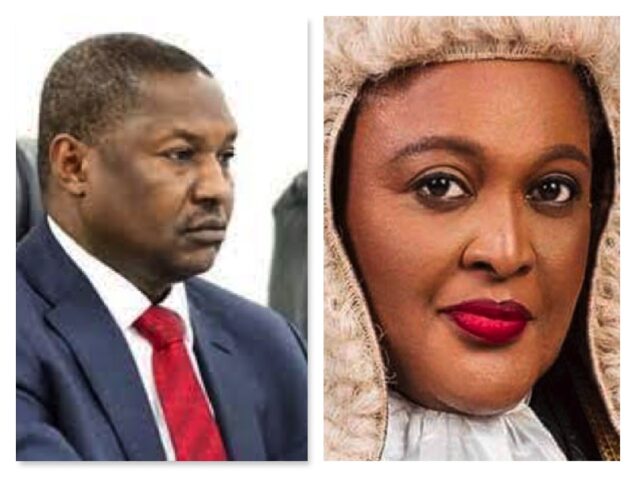 Attorney General of the Federation and Minister of Justice, Abubakar Malami, suspects that a gang of criminals may have stormed the Abuja home of Justice Mary Odili on Friday.

In a statement by his media assistant, Dr. Umar Jibrilu Gwandu, Malami pointed out several anomalies in the documents submitted by the invading security men.

First of all, he said his ministry does not have a Joint Recovery Panel, as claimed by the invaders.

“The general public need to know that there was nothing called “Joint Panel Recovery Under the Ministry of Justice” in the Office of the Attorney General of the Federation and Minister of Justice, and by extension the entire Federal Ministry of Justice.

“What we have is “Assets Recovery and Management Unit” the mandate of which does not include stings operations.

“Numerous incongruities in the documents being circulated in relation to the saga reveal traces of criminal actions which particular regards to:

“The ambiguous reference to “Ministry of Justice” without clarifying as to whether it is Federal or State Ministry and of which State,

“All these deductions would have assisted a discerning mind to arrive at a reasonable conclusion of criminal undertones associated with the court process on the basis of which the purported search warrant was procured”, said Malami.

He vehemently denied that his ministry was involved in the raid.

He said as the Attorney General of the Federation he will not be associated with “an apparent inelegant and nasty court process” of which the search warrant, presented by the security operatives, was procured.

“The media reports on the issue depict too untidy process that could never emanate from the Office of the Honourable Attorney General of the Federation and Minister of Justice.

“The Office of the Attorney General of the Federation and Minister of Justice has since reached out to the relevant authorities for an intensified wider investigation on the matter for necessary actions leading to the prosecution of anyone involved in the matter in view of the fact that the only names on record from the process filed in court are a purported police officer who claimed to be “O/C Assets Recovery Team” and one Aliyu Umar a deponent in the affidavit.