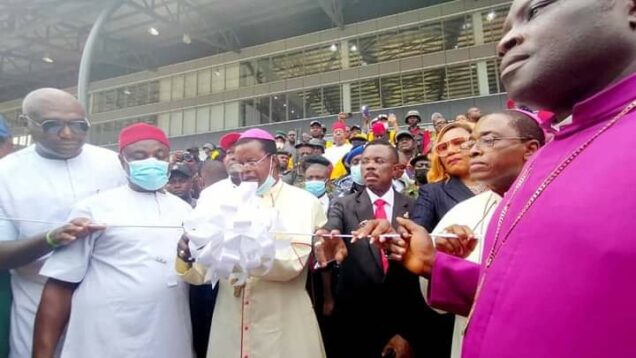 At the commissioning of Anambra Airport on Saturday

The governorship candidate of the All Progressives Congress, Senator Andy Uba did not attempt to stop the commissioning on Saturday of Anambra International Airport in Umueri by Governor Willie Obiano.

Mr Victor Ogene, Director, Media and Publicity for Uba described the report as fake news and lashed its purveyors for playing politics with every matter.

Ogene urged media men to dig deep and ask questions on issues bothering on lives and social development of the state.

“Journalists should search very deep into whatever news content is available to you to ascertain the true information and feed the public richly, do not depend on press releases always,” he advised.

Ogene asked “How can the Governorship candidate of the All Progressive Congress (APC) work against the treasure of the state he longs to govern?”

He urged the public to disregard the fake news.

He said that Uba cannot stop the commissioning of the Anambra International Passenger and Cargo Airport, Umueri, for commercial flight operations slated for October 30 because he is not the Aviation Minister nor an official of any of the Aviation agencies.

“As a citizen, he is delighted by the prospects of the state to have a cargo and passenger airport.

Ogene, however, cautioned against the deliberate politicisation of the issue.

He said that the process of building an Airport for the state started with land acquisition by the Mr Peter Obi Administration, and now the construction by Gov. Willy Obiano.

Ogene said that an Airport is an ongoing concern in need of constant development and upgrade and feared that what the people have expressed with the Anambra Airport project is the undue haste with which Obiano seeks to ‘force’ through the Commissioning of the Airport for purely political considerations.

He said that aviation business cannot be run like a motor park venture.

“Early 2021, Obiano said he would ensure the takeoff of the Airport before he leaves office. Now, the question is: Is Obiano leaving office this year?

Also, he said Obiano had requested in 2022 budget, still under consideration, the sum of N10 billion for the completion of the Airport project.

“Now, if the Airport is already completed and set to begin commercial activities, what is the N10 billion to be used for?

Ogene said that if the airport was due for operation, when was advertisement for recruitment of staff done and other facilities that needed to be down in the airport before operation?

He said that these and many other problems are what the people of Anambra are genuinely worried about because aviation safety is a serious business which must not be tainted by political considerations.

Speaking on the same matter, Amb. Elijah Onyeagba said that the idea of having an airport is laudable but caution should not be thrown off.

Onyeagba said from what he gathered from experts the airport is not ready for operations.

“The reality is that the airport is not ready, what it has at the moment is a runway and a makeshift terminal.

“They still have not concluded with NAMA on the training and deployment of Air Traffic Controllers.

“The navigational equipment (ILS, DME, VOR) have not been calibrated (all the above is NAMA related).

He said FAAN has not trained, certified and deployed AvSec personnel for airport security, they have also not installed security equipment.

NCAA, which does overall certification of the airport still needs to wait NAMA and FAAN reports.

“You have to note that this is a state airport, but all the roles are federal roles that they have to liaise with agencies and pay for like any private venture,” he said.

Onyeagba said: “The airport is beyond civil works, which is what Anambra State government has done, that is all hardware. It’s like buying a computer without operating system.

Onyeagba said that any violation of such trust can lead to NCAA losing its class A certification status, which will be bad for Nigeria, as all major international airlines will stop flying to Nigeria.

He said that it is important that Anambra people are well informed about the status of the new airport and need not play politics with lives of the people of the state and those who may wish to fly through the airport.

In a swift reaction, Mr C Don Adinuba, Commissioner for Information and publicity, said that the safety of the airport is right and assured that all is in place.

Adinuba said that the state has done its part due to the airport that aviation duties has been planned for.

Adinuba said that since April 30, 2021, the airport has been in use and every facility requirements to make the airport functional is on ground with all documentation.

“APC Anambra has successfully sabotaged landing of planes to touch down in day of commissioning but the truth is that we are victorious,” he said.

He said that news circulating the social media that Air Peace cancelled their flight to Umueri airport on discovery that the airport was not good enough was false.

“Airpeace was to board passenger from Lagos and Abuja on October 30 but was cancelled on reason of security, that is all,” he said.