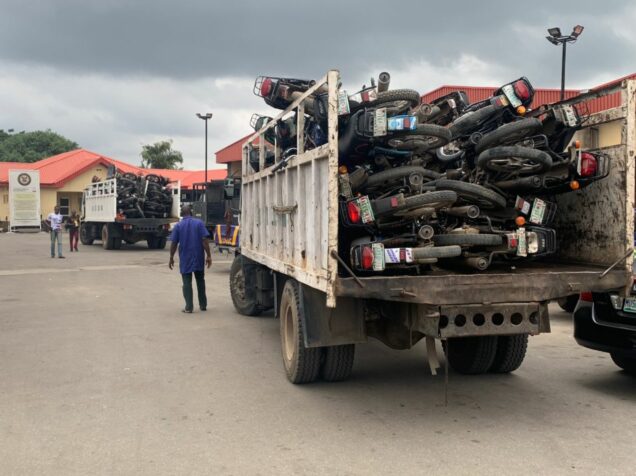 Some of the okadas impounded

The Chairman of the State Taskforce, CSP Shola Jejeloye said the clampdown was to stop on okada operators from plying restricted routes.

He disclosed that over 204 okadas were impounded  at Ojodu Berger, Ketu Alapere, Agric area in Ikorodu and Allen Avenue, Ikeja for plying restricted routes/roads and violating the State Laws on its restrictions on major highways.

Jejeloye said that the restricted routes have been published severally to avoid unnecessary excuses of not being aware of the State laws on their restriction by okada operators, but some of them turned deaf ears, and that all efforts put in place by the enforcement agency to sensitize, educate and enlighten them to see the danger of plying on the highways proved abortive.

The Chairman said that all the restricted routes would be closely monitored to rid the State off Okada riders’ menace which could lead to needless loss of lives and serious security challenges.

He emphasised that this week’s activities is a signal to all recalcitrant environmental laws offenders who circumvent government rules and regulations as provided by regulatory provision of the law, that such offenders shall be made to face the full wrath of the law.

In a related development, the chairman said that the agency also clampdown on many black spots as part of her efforts to maintain law and orderliness in the State.

He said that the unit again raided some black spots at Oshodi area, Mile 12 and other trouble spots in the state, where over 50 hoodlums were arrested with charms, machetes and other harmful weapons.

He added that his men were attacked by hoodlums in collaboration with okada riders at Ojodu  Berger area, but that they were subdued due to superior tactical and systemic strategies of his men.

Jejeloye said all the suspects would be charged to court for various offences and for disturbing public peace.

He maintained that the agency would not rest on its oars until all recalcitrant okada operators tow the line of best practices and the State is free from hoodlums and streets urchins.

He advised all owners of buildings, landed properties and areas being used as hideout for criminals to put them to proper use or risk being demolished and forfeited to the state government in consonance with Lagos State Environmental and Special Offences Laws, as owners of such properties who violated the laws would be prosecuted.