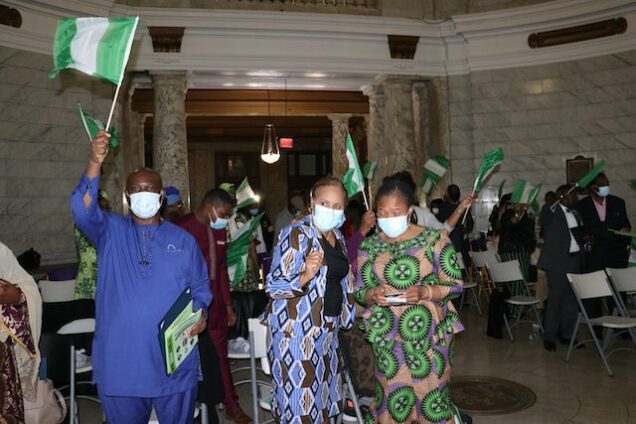 Hoisting of Nigerian flag at Newark City Hall in the U.S.

The City of Newark in the State of New Jersey, U.S. has celebrated the 61st Independence anniversary of Nigeria and hoisted Nigeria’s flag at the City Hall.

The flag hoisting ceremony was organised by the Office of the Mayor in collaboration with Nigerians In Disapora Organisation (NIDO), New Jersey chapter.

Dr Uzoma Emenike, Nigeria’s Ambassador to the United States, who spoke at the event, paid tributes to Nigerians in the U.S. for their exceptional display of professionalism and competence in various fields of human endeavours.

Emenike said that Nigerians residing in the U.S. had contributed greatly and impacted on the socio-economic development of their host country.

“We have them (Nigerians) as teachers in the classrooms from elementary to tertiary institutions.

“They are doctors; nurses, engineers, lawyers, officers, clergy men and women, entrepreneurs, business owners, restaurateurs, and contractors, and so on,’’ she said.

The envoy said Nigerians had continued to fly the country’s flag higher as they excelled and continued to excel in their various endeavours.

“We remain proud of their achievements and celebrate their contributions, which cut across every nook and cranny of the United States,’’ Emenike said.

According to her, Nigeria and the U.S. have continued to remain strategic partners over the years.

“The U.S. is the largest foreign investor in Nigeria, while Nigeria is the second largest U.S. export destination in Sub-Saharan Africa with 3.2 billion dollars in 2019.

“The trade in goods between our two countries totalled over 10 billion dollars in the same year.’’

Emenike said the U.S. and Nigeria had a bilateral commercial investment dialogue and Nigeria was eligible for preferential trade benefits under the African Growth and Opportunity Act (AGOA).

“With these indices, the potential for continued Nigeria-U.S. partnership is very bright and huge, and Nigerian missions in the U.S. are committed and determined to build lasting partnerships that would stimulate, sustain and deepen the already existing cordial Nigeria-U.S. relations,’’ the envoy said.

The Consul-General of Nigeria in New York, Amb. Lot Egopija, thanked Nigerians living in the City of Newark and State of New Jersey for their contributions to the development of their host country and assured them of the Consulate’s support.

“We are looking forward to continue to work with our compatriots and to ensure that together we attain that state that every Nigerian would want to be.

“You have done excellently well but don’t rest on your oars; we want to see a bigger and more impactful programmes and contribution in 2022,’’ Egopija said.

Dr Barth Shepkong, Chairman, Board of Trustees, NIDO America, enjoined Nigerians to learn from the lessons of the past and work toward building a formidable future.

Shepkong, represented by Dr Josephine Aguoji, Vice Chairman, Board of Trustees, NIDO America, urged Nigerians to muster strength and contribute to the growth of the country.

“Let us muster strength to set aside ego and personal interest so that we can take advantage of collective passion for Nigeria that we may turn our dream for a greater country into reality,’’ he said.

Also, the President of NIDO New Jersey chapter, Dr Adeola Popoola, urged Nigerians in the diaspora to celebrate in spite of the challenges in their home country.

Popoola said Nigerians had a lot to celebrate and be proud of, urging them to celebrate their home country in unity, love and togetherness.

Paying tributes to Nigerians living in the U.S., the Mayor of Newark, Ras Baraka, said Nigerians in Newark had contributed immensely to the development of the City.

“I salute Nigerians in Newark as they celebrate the six decades of Nigeria’s independence anniversary and I wish them success in their endeavours,’’ he said.

Deputy Mayor, Ligia De Freitas, who represented the Mayor said the U.S. has more than one million Nigerians.

“Nigeria is the most populous black nation in the world with more than 150 million population and one million Nigerians have immigrated to the U.S., contributing to our nation’s economy, strength and diversity.

The deputy Mayor said the flag raising was also to honour some eminent Nigerians for their service to humanity, including Prof. Tijjani Muhammed- Bande, President of the UN General Assembly, 74th Session, who has held long career in international diplomacy and received many awards for his works,’’ he said.

Bande received Merit Award for his contributions to humanity while Dr Kalu Ndukire received an award for Medical Philanthropy.

Mr Anozie Ugenyi got a Merit Award for helping to coordinate Nigerian community during COVID-19 lockdown.