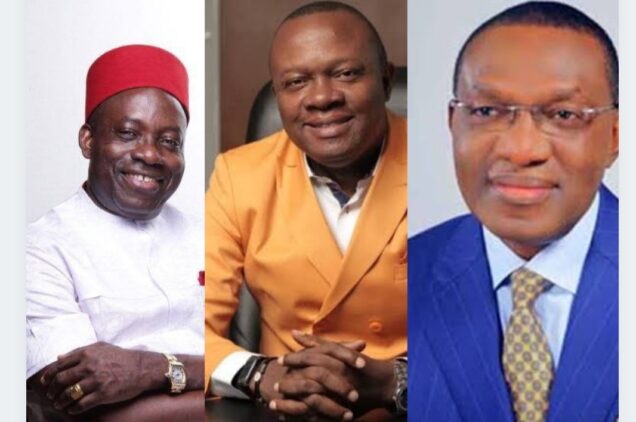 Governorship candidates in the forthcoming Anambra election have called for dialogue with secessionist group, the Indigenous People of Biafra.

Candidates of the All Progressives Congress, Senator Andy Uba; All Progressives Grand Alliance, Professor Chukwuma Soludo and Valentine Ozigbo of the Peoples Democratic Party made the call during their Live Debate organised by Arise News on Monday.

Former governor of the Central Bank of Nigeria, Soludo said the group deserves to be heard.

“I’m on record to have said that IPOB deserves to be heard, that the agitation cannot be shot down by a gun.”

“We need to have a dialogue, bring everybody to the table and discuss those specific issues that are their agitation,” Soludo said further.

Ozigbo, however, blamed the federal and state governments for the way the group’s agitation has turned out.

He said: “There are certain things IPOB does through agitation that I support. But when they get to some extreme, I condemn them.

“The real issue is where is the heart of all of this? If not for the way the states and the federal government have handled IPOB, we wouldn’t be where we are today.

“Let’s start by accepting responsibility. We created extremism, so we need the right person to inspire hope for that dialogue to happen.

“When they see you as the problem already, you can’t be the one to negotiate.”

IPOB’s agitation currently threatens the November 6 election in the state as the group declared a one-week sit-at-home in the South-East to demand the release of its leader, Nnamdi Kanu.

The order would commence November 5, a day before the Anambra governorship election.