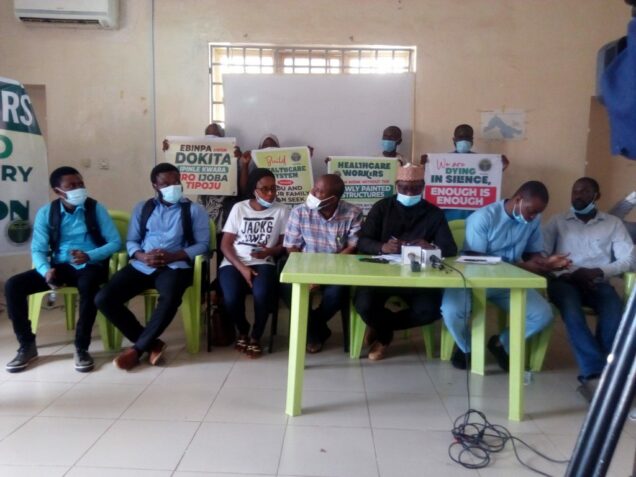 The National Association of Government General Medical and Dental Practitioners (NAGGMDP), Kwara branch, has declared a seven-day warning strike across the 16 local government areas of the state to press home their demands.

Dr Saka Agboola, the Chairman of the association, declared the strike at a news conference after an emergency congress on Monday in Ilorin.

According to him, as much as it is painful for the executive of the association to reach such a decision, congress has unanimously agreed on a seven-day warning strike action.

He explained that the industrial action is to give room for engagement with the government on some of their agitations on good conditions of service, especially in the payment of new remuneration to the members of the union.

“We are not a pressure group, but it has gotten to a point that the well-being of doctors in Kwara has to be seriously looked into. We have responsibilities to our families, our neighbours and even to our patients.

“There is a need to remunerate the doctors to get efficient output. This is the more reason why we have engaged several fora at every opportunity to resolve our demands.

“But it is unfortunate that at the expiration of the ultimatum given, we have not been able to reach a comfortable agreement,” he said.

Furthermore, Agboola reiterated that the one-week strike action would afford the government opportunity to re-engage the association in negotiation.

Reacting to the development, Mr Sa’ad Aluko, the Director-General of the Kwara State Hospital Management Bureau, said that the government had been making effort to resolve the demands of the doctors.

Aluko noted that it was only a question of time before their demands would be met.

Meanwhile, he said that the state government had met with the leadership of the association to look at ways to resolve issues.

Kwara state government had already agreed to a 70 per cent increase out of the 100 per cent that is being demanded by the association.

“Based on the total algorithm and internally generated revenue, everything has to be looked into.

“Also, the state government has set up a committee to look at a balance between what is being requested for and what is on the ground.

“Government is also confronted with various agitation from the Nigeria Labour Union but we must strike a balance,” he said.

However, Aluko said that the government had employed additional healthcare workers in the state hospitals.