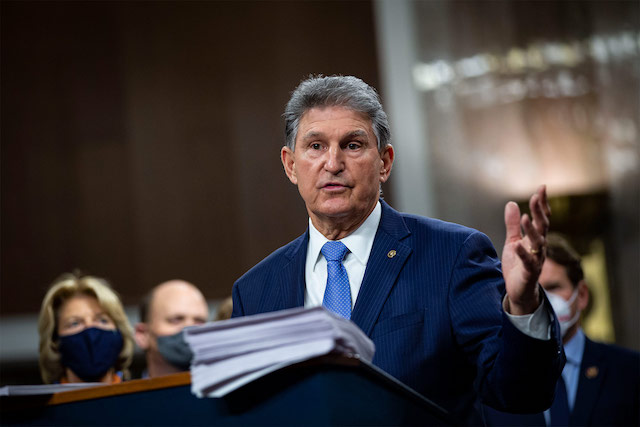 “I won’t support a multi-trillion bill without greater clarity,” Manchin, a holdout who has often served as a critical roadblock to Biden’s agenda, told reporters.

He portrayed the bill as being filled with “shell games” and “budget gimmicks” that would end up costing far more than its $1.75 trillion price tag.

Instead, Manchin demanded immediate action in the U.S. House of Representatives on a $1.2 trillion infrastructure bill already approved by the Senate.

Progressives in Biden’s Democratic Party have demanded that no vote occur on that measure until the larger bill to expand social programs and attack climate change was first nailed down and assured of Senate passage.

Biden has hung his hopes on passing the two bills, and visited Capitol Hill on Thursday to plead with Democratic lawmakers to support his agenda.

“I don’t think it’s hyperbole to say that the House and Senate majorities and my presidency will be determined by what happens in the next week,” Biden told a closed-door meeting with House Democrats, said a source familiar with his remarks.

The Senate is divided 50-50, with Democrats’ holding the majority by virtue of Vice President Kamala Harris’ tie-breaking vote. That means that any one Democratic senator has effective veto power.

The $1.75 trillion framework Biden sketched out last week included programs to fight climate change, increase the availability of preschool and boost other elements of the social safety net.

Top Democrats, including the party’s large progressive wing, had agreed to sharply scale back their hopes from an earlier $3.5 trillion goal.