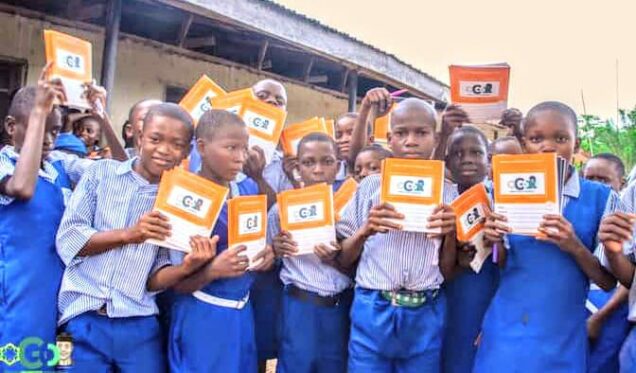 The Osinbajo Grassroots Organisation (OGO) put smiles on the faces of students at Alasagba Community High School, Igbara-Oke and Ikeji-Arakeji Grammar School, in Ondo and Osun states respectively during unscheduled visits to the two schools recently.

The visit was part of the ongoing donation of educational materials to students of public schools across the nation by the organisation.

The exercise was kick-started recently in Nasarawa and Niger states in the North-central geopolitical zone.

Mr. Ojo thereafter surprised the indigent student with the offer of paying her pending school, and West African Examination Council (WAEC) fees, after donating N20, 000 to her.

This left the staff and students dumbfounded as Adedokun was unable to pay her school fees before then, and uncertain of writing her WAEC due to her parents’ financial inability.

“This group actually came because of this girl, because we doubted if she was going to write WAEC due to the financial status of her parents,” the Vice Principal of the school, Mr. Akintoye, S.A. admitted, while responding to the development.

Astonished by the development, one of the visibly overwhelmed teachers who could not hide her emotions prayed, “As God used this organisation from nowhere to assist this almost hopeless girl; may this same God use himself for Prof Osinbajo in any areas he needs God.”

Addressing the students of both schools, the Convener stated that the visit was not politically inspired; he stated that as admirers of Prof. Yemi Osinbajo, the OGO is spreading messages about his impressive leadership qualities evident in his humility, loyalty, professionalism, competence and patriotism.

He added that Nigerians should imbibe the same qualities for nation building.

“The Vice President has laid exemplary leadership template by being a loyal deputy to President Muhammadu Buhari; a University professor, a Senior Advocate of Nigeria (SAN) as a lawyer; a responsible dad and husband at home. We also want you to be that successful, this is why we are visiting you, so that you also can go as far as you want in life, but first, take your education very serious,” the OGO leader charged.

Writing materials were distributed to every student in both schools, and the recipients expressed delight on the donations, as many of them claimed not to have enough of those materials prior to the visit.

The beneficiaries further expressed gratitude to the Vice President, Professor Yemi Osinbajo and the organisation for the kind gesture and for ‘remembering us in these local areas,’ and pledged to imbibe those qualities and emulate the VP as their mentor.

Ojo promised that the organisation will continue with the initiative, saying although they may not be so much, but was optimistic that many students will have their faith in the nation and their future rekindled through the little show of love.

He promised that more states will benefit from the educational outreach and other interventions by the Osinbajo Grassroots Organisation in the nearest future.