NSCDC discovers bomb on a farm in Borno 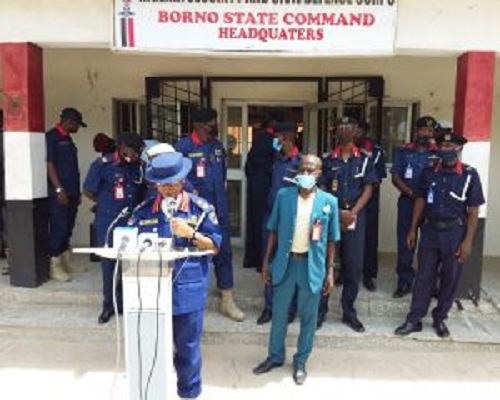 The Nigeria Security and Civil Defence Corps (NSCDC) Command, in Borno, has discovered explosives on a farm in Auno village of Konduga LGA.

The State Commandant, Musa Farouk stated this while briefing newsmen on Tuesday in Maiduguri.

He said the device was recovered by Agro Rangers.

“It has been confirmed to be Improvised Explosive Device (IED). We will liaise with the police bomb squad for its detonation,” Farouk said.

He listed items recovered to include a fuel truck, two generators, electricity and communication cables as well as illicit drugs including some quantity of cannabis Sativa.

The commandant reiterated the commitment of the corps to sustain an onslaught on criminals in the state.

He lauded the support from Gov. Babagana Zulum’s administration to security agencies in the state.

“We want to assure the people of Borno that we will continue to do our best to sustain constant patrol and surveillance in the state.

“I want to appeal to the good people of Borno to help us report any suspicious movement and case of vandalism,” Farouk said.

He listed dedicated lines for the public to reach out to the corps.