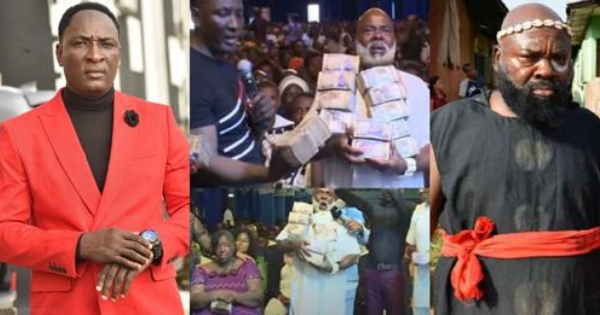 Prophet Jeremiah Omoto Fufeyin has given an ailing actor Emeka Ani a relief fund of N6million to support his medical needs.

The founder of Christ Mercyland Deliverance Ministry, Warri gave Ani the money during service on Sunday.

Reacting to the gift, Ani said: “I want to thank God for this wonderful gesture from the Senior Prophet of God, Prophet Jeremiah Fufeyin. I am so happy. I never expected this.

“Even though I know that he helps people financially and otherwise. I never knew he was going to give me a huge amount of money like this. I want to thank members of the church. I want to thank the prophet of God.”

Ani’s health had degenerated in 2020 as a wound that developed in his buttocks was operated in Owerri.

He had made a video begging people to help him live on social media.

Ani had further said in the video that he was also close to going blind as cataracts had already developed in one of his eye.

He noted that the worsening health challenge had developed into a partial stroke while calling on Nigerians to help him.