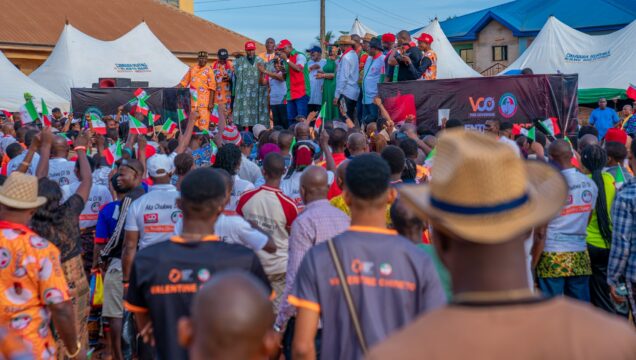 The Peoples Democratic Party (PDP) has called on the electorate in Anambra to vote and ensure victory for its candidate, Mr Valentine Ozigbo, on Nov. 6 in order to take back their state.

The party governors and other chieftains made the call at the grand finale of the governorship campaign rally held at the Alex Ekwueme Square, Awka on Tuesday.

Addressing the crowd of party faithful and supporters at the event, Gov. Ifeanyi Okowa of Delta said PDP remained the best party for Nigeria.

Okowa said the party had demonstrated through the recent national convention that it was ready to get back to power and reposition Nigeria.

He specifically appealed to women and the youths to vote for PDP on Saturday, saying that victory in Anambra was a precursor to the success of the party in future elections.

The Delta governor further appealed to those who had any grouse with the party to put it behind them and work for Ozigbo’s victory at the poll.

Also, Gov. Seyi Makinde of Oyo State described the election as a choice for the best of all the candidates in the race.

Makinde urged the people to unite against bad leadership and those who had told them lies just to have access to power and mismanage their common wealth.

Gov. Okezie Ikpeazu of Abia, who is chairman of the PDP National Campaign Council, said “Anambra deserves to connect to the table of national discourse and should no longer wallow in political parochialism.”

Ikpeazu said public infrastructure in the South-East had collapsed and that businesses and businessmen were suffering because of a lack of critical infrastructures such as roads and ports.

He urged the Anambra electorate to overcome their fear and vote for the PDP candidate, assuring them that their votes would count and nobody would manipulate the results.

In his speech, Ozigbo said his emergence would bring breathe of fresh air in Anambra.
He said he had seen the “pains and anger of the people as a result of bad governance” in the past years.

He, therefore, urged them to make a conscious effort to change their narrative by ensuring victory for him and PDP.

“I will take Anambra from where Mr Peter Obi left it and take it higher by developing all sectors, Ozigbo said.

“Deliver us as the next government and we will deliver the state back to you,” Ozigbo said.
Other people who spoke at the rally were former Gov. Obi, Edo Dep. Gov. Philip Shuaibu, Sen. Uche Ekwunife, and Sen. Ben Obi, amongst others.