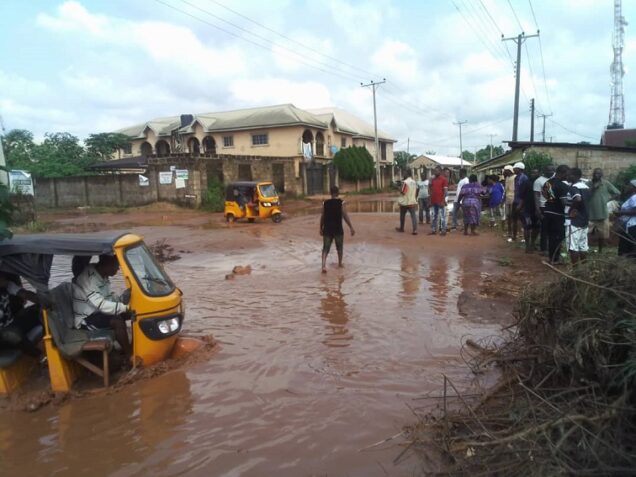 Residents of Uteh Community in Edo State protest over inability of management of NDDC to complete a road contract in their area since 2014.

Residents of Palace Road, in Uteh Community of Ikpoba-Okha Local Government Area of Edo State, on Wednesday called on the State Government to prevail on the management of the Niger Delta Development Authority (NDDC), to complete the road they contracted for construction since 2014.

The residents made the call during a protest over the abandonment of the road by the contractor handling the project.

The protesters which are made up of residents, Keke riders, bus drivers, and others blocked the ever-busy Upper Mission Extension, with placards bearing different inscriptions like: “NDDC should rise up to its responsibility”, “NDDC should wake-up from slumber”, “Project not done to specification” among others.

The leader (Odionwere) of the community, 74-year-old Robert Owen, said the road was contracted by NDDC in 2014, but was abandoned halfway by the contractor.

“This road leads to 12 communities and was awarded for rehabilitation to a contractor by NDDC in 2014. They did it halfway and abandoned it. Till now, there is no action, you can see the gully and no attention from the NDDC that stopped the work.

“We are calling on the Edo State Government to prevail on NDDC to come and complete the job. The road was done halfway and substandard,” he said.

Also, Speaking, a shop owner, Mrs. Doris Osayende, said the state of the road has effected her business negatively, as motorists avoid the road whenever it rained and the entire road is heavily flooded.

“This road has become a problem, that is why I have to construct a fence round my shop, many times flood water entered my shop and spoiled my rice and provisions. I am pleading with the government to come to our aids,” she said.

Also, a tricycle operator, Friday David, lamented that each of the over 100 operators pay N300 daily as revenue to the government and another N10,000 as riders permit, but does not reflect on the road.

“We are pleading with the Governor to please come and help us, we voted for him and he should help us,” he said.

A staff of NDDC in Benin office who refused to disclose his identity, said he could not comment on the issue because he is new in Benin. He, however, promised that the management will definitely look into the matter.

“I don’t know anything about that contract, I am new in Benin City, and the person that supposed to give an answer to your question is on leave,the management will look into it,” he said.