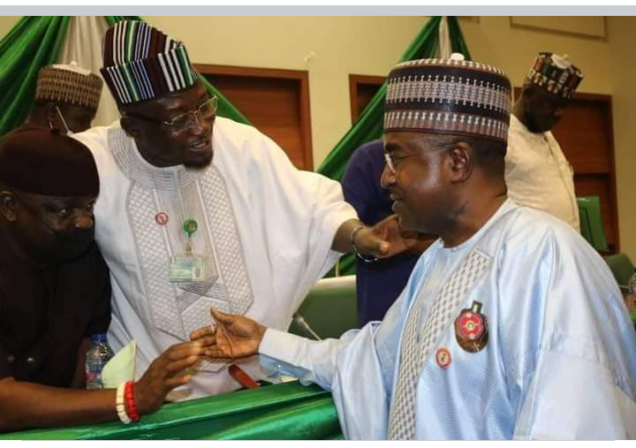 The National Drug Law Enforcement Agency (NDLEA) today submitted a budget proposal of N38billion for the year 2022 to the National Assembly for consideration.
The budget estimate comprises Recurrent Personnel Cost of N10,499, 961,097, Recurrent Overhead of N998,973, 302 and capital expenditure of N26,662,354,452.
Chairman and Chief Executive of  NDLEA, Brig-General Mohammed Buba Marwa who presented the budget of the agency, expressed gratitude to the House of Representatives Committee on Narcotic Drugs for its support to the agency.
The chairman gave the commendation while intimating the House Committee on details of its proposed budget for the year, 2022.
He said efforts of the Committee towards amending the Police Trust Fund Act and the bill being sponsored by the chairman of the House Committee on Narcotic Drugs Dr. Francis Ottah Agbo on compulsory routine drug tests are extremely beneficial to the agency.
Lamenting the demerits of poor funding to the agency, the chairman stressed the need for adequate funding, saying the personnel of the agency risk the temptation of being corrupted if NDLEA continuously remains underfunded.
He said with over 10,000 personnel and 173 formations including 111 area commands, it is lamentable that the agency gets only about N33 million monthly for its operation.
Earlier, Agbo commended Marwa for turning the NDLEA around within the short time he assumed office.
He said the agency was dead before Marwa “came to judgement,”and restored it to life. He appreciated Marwa and his team for recording gigantic successes in less than 10 months. While stressing that Marwa and the management staff achieved these feats “with bare hands,” the Chairman said the Federal Government of Nigeria could leverage on the success story of NDLEA to redeem the battered image of Nigeria, the same way that the President Olusegun Obasanjo used NAFDAC under the leadership of late Professor Dora Akunyili to rebrand the country.
He said the 9th National Assembly is committed to partnering with NDLEA to wage the concerted war against the drug scourge which he said could destroy Nigeria if it “is not urgently nipped in the bud or brought to the barest minimum.”
As part of its contribution to strengthen the NDLEA, the lawmaker said his committee is sponsoring critical bills that are aimed at making the agency to bark and bite.
The bills include the amendment of the NDLEA Act to amongst other things wipe out option of fine usually granted drug offenders as well as make them forfeit all their assets upon conviction by the court of law. Similarly, as part of its effort to frontally tackle the menace of drug test, another bill is proposed to make routine drug test compulsory for politicians, students, pilots, security personnel etc.
Acknowledging that the NDLEA is grossly underfunded, the Committee Chairman said he is proposing a bill to make the agency get its funding directly from the presidency while the bill to amend the Police Trust Fund Act and make the NDLEA a beneficiary of the funds has passed first reading!
Agbo who is also the chairman of the minority caucus, said the House Committee on Narcotic Drugs is not in support of the bill to legalise the use of cannabis in Nigeria.
He said the upsurge in crimes and criminalities especially, terrorism, banditry and kidnapping are linked to heavy use and reliance on narcotic drugs. While noting that Cannabis is the most abused drug, he declared Nigeria as the highest abuser of Cannabis in the world!
The Chairman said the committee will not support the bill as Nigeria already has many cases of drug related crimes, noting that any attempt to legalize Cannabis use will further escalate crimes and criminalities in Nigeria.
“Let it be known that the joint committee of the National Assembly is not in support of the bill targeted at legalizing Cannabis,” he said.
Last year, under the chairmanship of Col. Mohammed Abdallah (rtd), the agency proposed N12, 688, 496 as its budget estimate for 2021 out of which N9.6 billion was for recurrent expenditure and over N3 billion as capital expenditure with N398m for overhead.