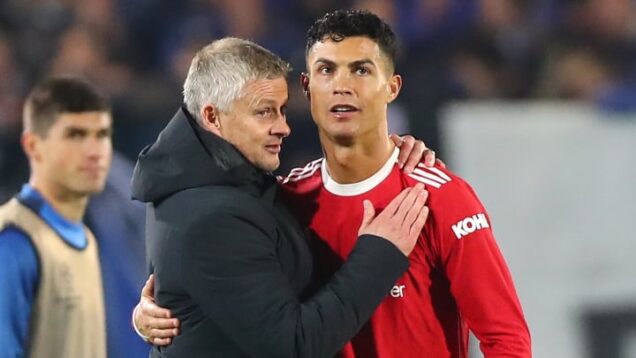 Manchester United boss Ole Gunnar Solskjaer has described Cristiano Ronaldo as ‘incredible’ after he rescued a point for the club in the Champions League game against Atalanta on Tuesday night.

Ronaldo netted equalizers at the end of both halves as United earned a 2-2 draw at Atalanta to keep qualification for the last 16 alive.

United went behind to a soft Josip Ilicic goal, which Solskjaer is adamant should have been ruled offside for interference in David de Gea’s eye line, but he hailed the character of his side to come back once again.

“It’s a tight game, it flowed both ways, they had two goals which were very tight hoping for offside – I thought it was off the first because he interfered with David’s view,” Solskjaer told BT Sport.

“But Cristiano is just incredible, that’s what he does. If there’s anyone you want the chance to fall to in the last minute – and a difficult chance, he keeps his eye on the ball, the technique, incredible.

Ronaldo’s first goal came after a rare spell of neat United possession, culminating in the superstar being teed up by Bruno Fernandes.

“The first goal was a proper team goal, great quality in the passes,” Solskjaer added. “Five or six or seven passes in that little exchange before that little last exchange. That was the first moment we really played the football that we should do.

“Sometimes you don’t plan to concede a goal – I still think it’s offside, he’s interfering with David’s view and normally he’d save that one – and we’re at a difficult place. The atmosphere was electric, they’re a very physical and aggressive side that’s hard to play against.

“The quality wasn’t always there. Eric Bailly blocked a fantastic chance for them. When you make a mistake, make up for your teammate’s mistake, the character was spot on again. They kept going, never gave up.”