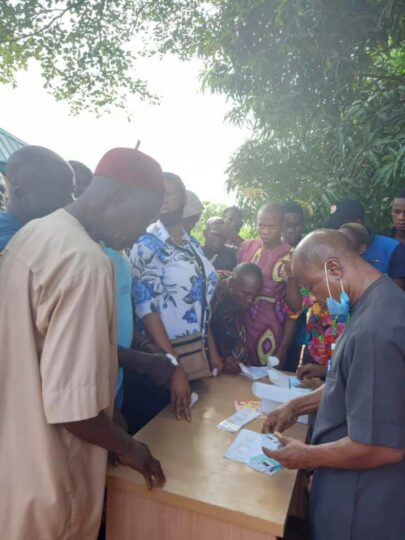 Collection of PVCs at INEC office in Anambra East LGA

Election fever has gripped Anambra state, 48 hours to the governorship election that will elect the successor to Willie Obiano of the All Progressives Grand Alliance.

This is amid the prior order by the Indigenous People of Biafra,IPOB, asking people to stay at home from Friday, including election day on 6 November.

The group which maintains a religious following in the region ordered the sit-at-home to force the Buhari government release its leader Nnamdi Kanu.

How will things play out on Saturday? Will the voters listen to IPOB?

No one can safely predict until the election day.

The Anambra government declared Thursday Nov. 4 and Friday Nov. 5 as work-free days ahead of the election.

Mr Harry Udu, the Head of Service in Anambra said the work-free days will enable residents to move to the locations where they registered as voters.

“This will enable Public Servants in Anambra to travel to their respective communities to cast their votes on Saturday Nov.6,” he stated.

Similarly, the Police Command in Anambra said there would be a total lockdown from Thursday to enable the Police to take control of the space and deal with situations promptly.

Mr Echeng Echeng, Commissioner of Police in Anambra, said top notch measures had been put in place to ensure maximum security of life and property.

DSP Nkeiruka Nwode, Zone 13 PPRO and Head, Media for Anambra governorship election, who disclosed this in a statement, said Police assets and personnel posted from various Commands and formations had started arriving.

A total of 34,000 and 20,000 personnel were deployed for the election by the Police and Nigeria Security and Civil Defence Corps respectively.

On Wednesday, many residents of the state trooped to INEC offices to collect Permanent Voter’s Cards(PVCs).