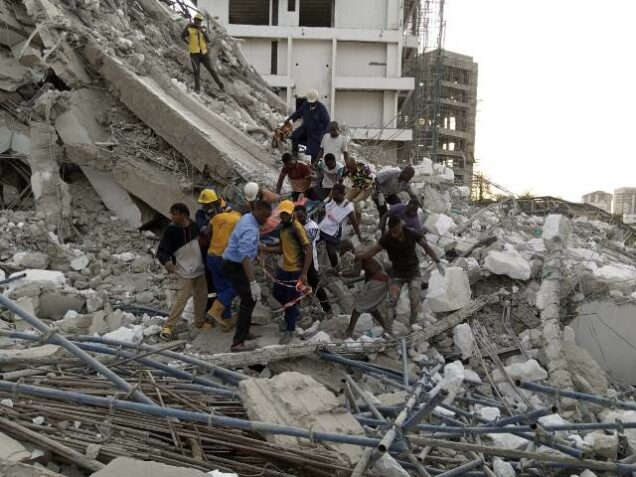 The collapsed building in Ikoyi

The hope of getting more survivors in Monday’s collapse of 21-storey building in Ikoyi, Lagos State is dim as death toll has risen to 29.

The building under construction on Gerrard Road, Ikoyi, caved in four days ago with many people trapped in the rubbles.

Emergency responders have been working day and night to rescue trapped victim.

In four days, only nine people have been rescued alive, while 29 bodies have been evacuated so far as at Wednesday evening.

As the days go on, hope of more survivors is unlikely. On Wednesday, nobody was rescued alive as about seven brought out of the rubbles were dead.

Governor Babajide Sanwo-Olu was at the scene of the tragedy on Wednesday, as he set up a six-man panel to proble the tragedy.

Sanwo-Olu said: “We’ve promised to be open and thorough in investigating the cause of the collapse. In that regard, I have set up a high-powered professional investigative panel whose membership consists of professionals outside of the Government.

“The panel members have been given clear terms of reference and we are giving them 30-day assignment to tell us what has gone wrong at the site.

“The panel will be finding out who the culprits are. The investigation will start from the heads of regulatory agencies. Be rest assured that if there are other people that are found wanting in the course of investigation, everybody will face the full wrath of the law.

“Members of the panel are people of impeccable integrity and I will be signing an executive order to give the panel a legal backing.”