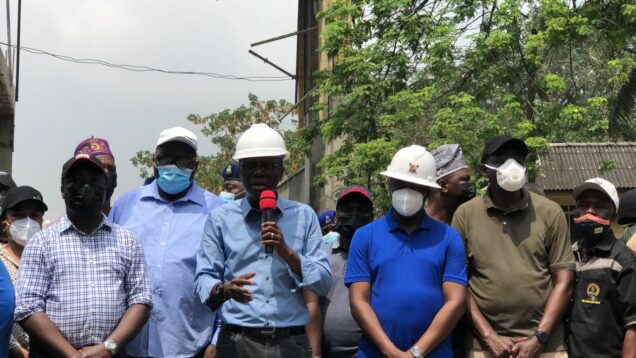 Sanwo-Olu speaking at the scene of the collapsed building

Governor Babajide Sanwo-Olu has declared three days of mourning over the collapsed Ikoyi building, as ddeath toll soared to 38.

The 21 storey building collapsed on Monday.

A statement issued by Commissioner for Information and Strategy, Gbenga Omotoso on Thursday said the governor has directed that all flags are to be flown at half-staff in public and private buildings.

Official engagements have also been cancelled during the mourning period.

“The Lagos State Government, once again, commiserates with all those who lost their loved ones in the unfortunate incident.

“Governor Sanwo-Olu has visited the site thrice to encourage the rescuers and console relations of those who are believed to have been trapped in the 21-storey building.

“He was today at the hospital to cheer up those injured before swearing a six-man panel of Inquiry to find out why the building went down and recommend measures to prevent such incidents,” the statement said.

The 21-storey building on Gerrard Road, Ikoyi caved in on Monday with many people trapped in the debris.

“About 38 people have so far died”, Omotoso said.