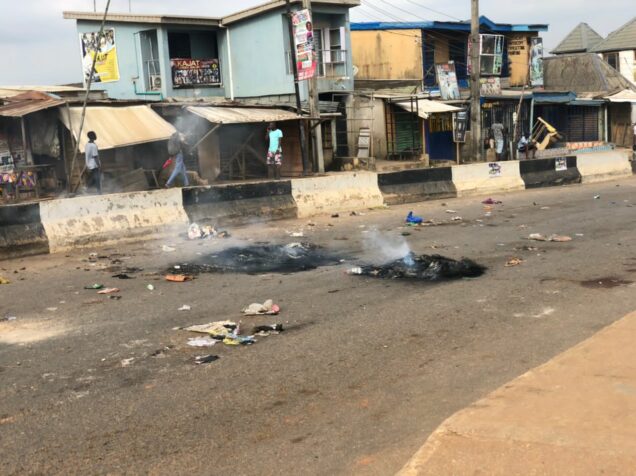 Two persons have been shot dead in a fierce arm battle between officers of the Nigeria Police Force and members of Tricycle Owners and Operators’ Association of Nigeria (TOOAN) at Command, Meiran Road, Lagos.

PM News correspondent, Nimot Sulaimon gathered that the first incident which involved a tricycle rider happened at about 8:20am on Thursday.

The police officer who is a traffic warder at the Ile-Iwe Police Station had stopped the tricycle rider, identified as Wale, and demanded a bribe of N50, but he refused to give in.

The unidentified police officer traced the tricyclist from Ile-Iwe to Command bus-stop, and allegedly stabbing him several times with a dagger.

“He refused to bribe them. The policemen are constantly collecting money from motorcycle and tricycle riders in that area. However, this gentleman refused to pay them this time,” an eyewitness told our reporter.

Following the incident, the union members rushed to the scene to protest, but the police officers tear-gassed them and shot in the air, killing another person.

The victim was a vulcanizer apprentice of about 15-year-old, leaving the whole area in a very tense condition.

Residents and motorists were cautioned to avoid the main expressway.