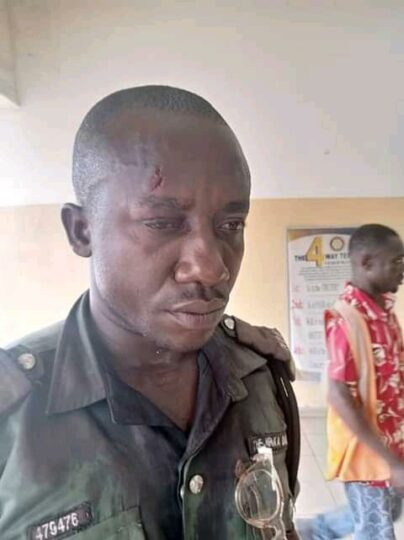 Police officer attached to Rivers State Taskforce on illegal Street Trading by with the injuries he sustained during clash with angry traders and hoodlums.

A Police Officer and six members of Rivers State Government Taskforce on illegal Street Trading are now in hospital being treated for various degrees of injuries sustained during clash with traders and hoodlums at the demolished Trans Amadi Slaughter Market, Port Harcourt.

The Coordinator of the Taskforce, DSP Felix Nwadibeyi (retd.) had led his officials to dismantle illegally mounted kiosks, umbrellas and tables at the market. But as they proceeded to set the items ablaze, the angry traders reportedly mobilized hoodlums who started hauling stones, broken bottles and other dangerous weapons at them.

Six members of the task force and a police officer were injured in the process. 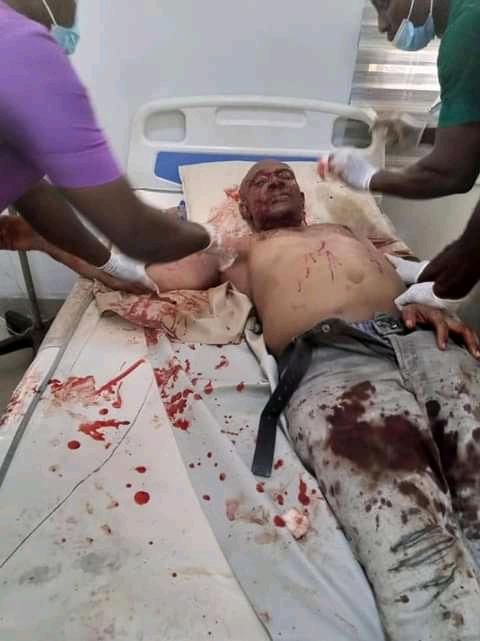 “We were there to clear those involved in street trading. On arrival, we were taken unawares by the traders who mobilized to attack us with stones and other dangerous weapons,” Nwadibeyi said.

Our Correspondent gathered the Police and other security agencies deployed to the market later were able to restore calm, while a couple persons were arrested.

Recall that the state government had on August 2,2021 announced the permanent closure of the Trans Amadi Slaughter Market and banned trading activities in area.

The decision of the State Government was announced by Dr Fred Kpakol, Commissioner for Agriculture after an executive Council meeting.

He also stated that the government will be building another Abattoir.