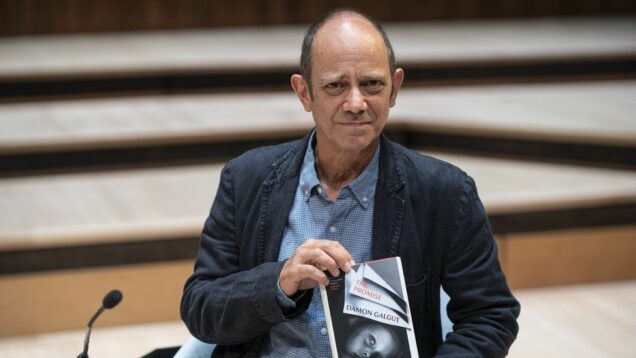 South African writer Damon Galgut has won the 2021 Booker Prize with his novel, The Promise, a portrait of a white South African family navigating the end of apartheid.

Galgut becomes the third South African to win the prestigious fiction prize, after JM Coetzee and Nadine Gordimer. The Promise is his ninth novel, and his first in seven years.

Galgut was announced the winner of the £50,000 prize last night at a ceremony held at Broadcasting House in London, United Kingdom by the BBC’S Samira Ahmed.

The judges praised The Promise as “a spectacular demonstration of how the novel can make us see and think afresh”, and compared it to the work of William Faulkner and Virginia Woolf.

The novel, according to the Booker judges, is “a strong, unambiguous commentary on the history of South Africa and of humanity itself that can best be summed up in the question: does true justice exist in this world?”

“We felt among the judges that this book really is a tour de force. It combines an extraordinary story with rich themes – the history of the last 40 years in South Africa – in an incredibly well-wrought package,” said the chair of the Booker judges, historian Maya Jasanoff.

“Before we even started talking about the individual titles, we had a more wide-ranging discussion about what it is we feel makes a book a winner. One of the judges drew a distinction between the very good and the great. For me, The Promise manages to pull together the qualities of great storytelling – it’s a book that has a lot to chew on – with remarkable attention to structure and literary style. With each reading of this book, it revealed something new,” Jasanoff said.

Through the lens of four sequential funerals, each taking place in a different decade, The Promise follows the Swarts, a white South African family who live on a farm outside Pretoria. The promise of the title is one the Swarts make – and fail to keep over the years – to give a home and land to the black woman who worked for them her whole life.

However, what make Galgut’s win spectacular is that this is the first time he will be walking away with the prize despite having been shortlisted twice before. Alluding to his previous shortlisting in his acceptance speech, Galgut was modest, paying tribute to his fellow South African writers.

“It’s taken a long while to get here, and now that I have I kind of feel that I shouldn’t be here,” he said. “This could just have easily gone to any of the other amazing, talented people on this list, and s few others who aren’t.

“But seeing as the good fortune has called me has fallen to me, let me say this has been a great year for African writing and I’d like to accept this on behalf of all the stories told and untold, the writers heard and unheard, from the remarkable continent that I’m part of. Please keep listening to us: there’s a lot more to come,” he maintained, adding “I hope people will take African writing a little more seriously now.”

Galgut thanked his agent, his publishers and the Booker judges, saying: “It’s changed my life, and please know that I am really profoundly, humbly grateful for this.”

When asked how he felt about winning the prize, Galgut said: “You better ask me that tomorrow because my nerves have gone numb, I’m stunned, I truly didn’t expect to be standing here.”

In his discussion with Ahmed, Galgut spoke about the cinematic quality and structure of his novel, and one of the lead characters, Salome, who rarely speaks and has no narrated inner life.

“It was a decision I took early on,’ he said. ‘I could have inhabited Salome’s thoughts in the way I did with the other characters, but I thought I made her silence and her absence, if you like—even though she’s present in the story—more powerful if I never went there. So I filled in the space around her, I guess. The point to be made, really, is that a woman like Salome, a rural, uneducated Black woman, is somebody even in the new South Africa who still has no voice and I wanted that to register as almost a physical fact.”

Galgut was also asked if it was important that the book was funny.

“It’s important to me,’ he said. ‘In all the previous novels I keep getting told by critics that I have no sense of humour, which actually is not true, I find a lot of things very funny. So the particular narrative voice that I discovered for this book allowed me to give voice to some of my humour, which is certainly a dark humour but it’s funny nevertheless, at least to me, and I guess a few other people.”

Galgut got the idea for the novel, which Europa Editions published in the United States in April, from a conversation with a friend, who described going to a series of funerals for family members. It sounded like the perfect narrative vehicle for a family saga. Galgut began working on a novel centered on a family — “just an ordinary bunch of white South Africans,” he writes — whose matriarch dies of cancer in 1986, when South Africa was convulsing with political unrest. The novel’s title refers both to the unrealized promise of social equality after the end of apartheid, and to the matriarch’s promise to leave a house to a Black servant, Salome, which causes a rift in the family.

He set the novel in Pretoria, where he grew up, in part to explore the region’s dark history of apartheid and racial violence and the impact that had on his childhood.

Galgut, who now lives in Cape Town, has described the Swart family as “a kind of amalgamation of everything I grew up with in Pretoria”.

“They’re a mix of English and Afrikaans, and a hodge-podge of creeds and beliefs, too. Not unusual for this part of the world. But what makes them ‘representative’ isn’t their characters, it’s the times they’re living through,” he said in an interview for the Booker prize.