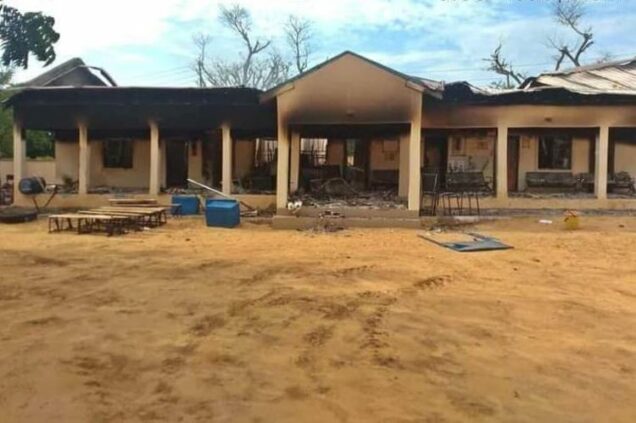 Terrorists invaded the headquarter of Magumeri Local Government Area in Borno State and razes down the only functioning telecommunications mast in the council.

A fully equipped general hospital that was recently equipped by the Borno State Government was also burned into ashes.

A tractor provided by the state government to the council in order to reduce the hardship of the farmers was also seized by the terrorists.

The insurgents invaded Magumeri Town at about 04:00 pm on Thursday and started gunshots sporadically at about 04:57 PM which lasted for almost 2hours.

They carried out the devilish acts despite attempts by the military to dislodge them.

Magumeri Social Media Forum – MSF also gathered that an innocent lactating mother died as a result of sporadic gunshots between the insurgents and the military while the other one was also injured.

Police deny abduction of its officers.

Meanwhile, police in Borno on Friday denied media reports that the terrorists abducted two policemen in the attack.

Commissioner of Police in the state, Mr. Abdu Umar said the police were not affected by the attack.

“The story going around that the Police Divisional Office in Magumeri was attacked, looted, and burnt while two policemen were abducted is not true.

“The police station was not attacked and none of the policemen was abducted and detainees were not released as erroneously claimed.

“The terrorists did not loot drugs but took away bedspreads, towels, and outpatients’ chairs in an unused small clinic. They also set fire on the surrounding grasses which did not touch the building,’’ he said.

Umar explained that the terrorists suspected to be from a faction of the Islamic West Africa Province, also set a GSM tower ablaze and stole a generator.