Sgt. Akpoboloukeme murders colleague over a joke in Bayelsa 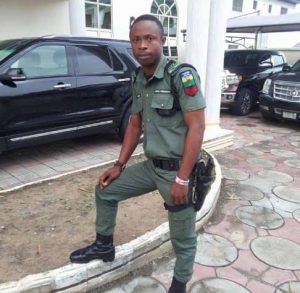 Sgt. Sapele Eyeridideke an officer with Bayelsa Police Command who was stabbed to death by his colleague, Sgt. Governor Akpoboloukeme,

A police officer with Bayelsa Police Command, Sgt. Governor Akpoboloukeme, has been arrested after he stabbed his colleague, Sgt. Sapele Eyeridideke to death over a joke the deceased cracked at a party attended by two of them.

The incident occurred on Nov. 4, 2021 at Edepie, Yenagoa, according to a statement by the Command’s spokesperson, Mr Asinmi Butswat.

According to the News Agency of Nigeria, Akpoboloukeme immediately attempted to run away to a neighbouring after the murder, but he was intercepted and arrested on the East/West Road.

On why the police officer killed his colleague, an eyewitness said the two policemen, who are cousins, attended a marriage ceremony at a popular hotel in Yenagoa where the deceased made a joke as they sat on a table.

The suspect didn’t feel happy about the joke and reacted in a violent manner.

The cousins were almost engaged in fisticuffs, when friends stepped in and settled the duo.

The two cousins left the venue with the belief that they were going to their separate homes.

Rather than go home, Akpobolokeme trailed Eyeridideke to a secluded place and stabbed him with a dagger on the left part of his rib cage killing him instantly.

The corpse has been deposited at a mortuary, the eyewitness said.

Bayelsa Commissioner of Police Mr Ben Okolo, has ordered the detention of Akpobolokeme and an investigation of the incident, Butswat added in the statement.