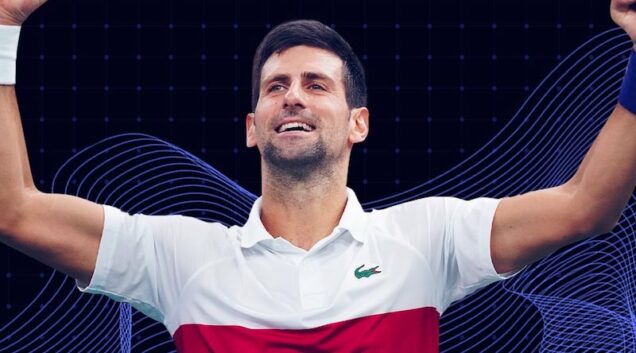 Novak Djokovic clinched the year-end world number one spot for a record seventh time when he secured his place in the Paris Masters final on Saturday with a 3-6 6-0 7-6(5) victory against Poland’s Hubert Hurkacz.

The top seeded Serbian overcame a wobbly start at the Bercy arena against an opponent who booked the last ticket for the season-ending ATP Finals on Friday before racing through the second and handling his nerves in the third.

Gunning for a sixth title in Paris, Djokovic will face his US Open final conqueror Daniil Medvedev in Sunday’s showdown.

Djokovic, who needs to win the Paris final to avoid failing to claim a Masters title in a season for the first time since 2017, dropped serve in the eighth game and Hurkacz followed up on serve to seal the opening set.

It spurred Djokovic into action and the world number one allowed his opponent only 11 points in the second set.

Hurkacz regained his composure in the decider, but Djokovic was a notch above and he broke for 3-1 with a forehand winner at the end of a long rally.

He followed with a service game to love but Hurkacz fought back to break back for 3-4 as he hammered a forehand winner down the line.

Djokovic wasted a match point at 5-4 and the tie went into a decider, which Hurkacz dominated until he buried a routine forehand into the net to put Djokovic 6-5 up with another match point.

The Pole sliced a backhand wide, allowing Djokovic to move within one victory of a record 37th Masters title.

Both he and Rafael Nadal are tied with 36 titles each.