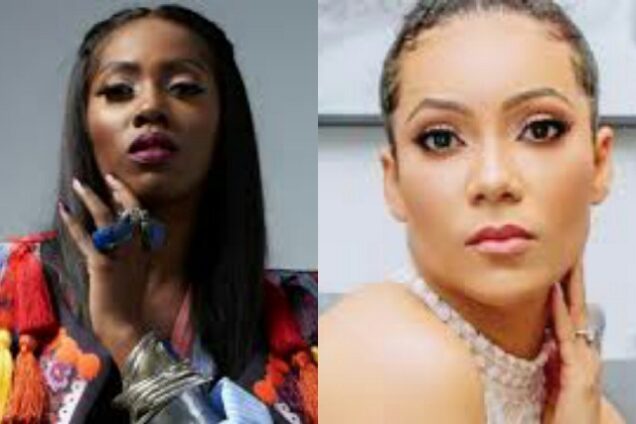 They are two of a kind. One of mixed parentage, the other a full-blooded Nigerian. But they make a perfect mix. However, in spite of their epidermal differences, which are only skin deep, they have so many things in common.

They are both celebrities, educated in the United Kingdom, beautiful and boasting salacious features men gush about and fawn over. And they like flaunting their sexuality and natural endowments to the admiration of their male fans.

Welcome to Tiwa Savage and Maria Chike of the BBNaija fame. Still, beyond their physical features, they share a common bad-girl persona and are fixtures on social media. But lately, they have set the internet on fire with their actions, overtly or covertly. And controversy is their forte, as they bask in the publicity it engenders.

However, another thing that the two celebrities have in common is that they have a morbid desire to be in the spotlight, to trend, even for the wrong reasons and not give a damn about them. In fact, they are mistresses of trends, of viral videos. They go all out to trend and make no bones about it. Yet Cupid, the god of love, has not been kind to them.

While Savage trended when she got married to Tunji Tee Billz Balogun, her former manager, she basked in the limelight again when the union crashed three years after over allegations of infidelity. And for a long time nobody got a handle on her love life until her sex video was allegedly leaked by blackmailers recently.

An air-hostess turned real estate developer, Maria shot to limelight when she entered BBNaija as one of the wildcards. No sooner had she entered the house than she started trending, what with her conspicuous beauty and assertive personality, getting into altercations with Queen and Boma and a scandalous affair with Pere.

She trended again when the housemates discovered to their consternation that she and Pere were the wildcards. She trended again for a while when Pere confessed to some of the housemates that they made out on a certain night when Maria touched him and herself and put her finger inside Pere’s mouth. Though she later denied ever making out with Pere, her stay in the house was short-lived.

And now the duo, Savage and Maria have raised their propensity to trend a notch higher. Not only have they been trending for the wrong reasons, they are unapologetic and unabashed about it. Savage set the internet on fire again recently when her blackmailers leaked her sex video, which controversial On Air Personality, Daddy Freeze famously described as 10 powerful seconds.

Though the Kelekele Love crooner had earlier alerted the public about the blackmailer’s threat in an interview with American OAP, Angie Martinez of New York’s Power 105.1 FM, the raunchy sex video elicited not a few reactions, for and against her, when the video was released; even though she had threatened to release the video in which she was having a steaming sex with her boyfriend herself as, according to her, she was “that crazy.”

He said; “@grandfish1 @iam_lolofish_27 I get dollars for you, I get pounds for you, there is nothing sweeter than family, wives stay woke girls like @mariachikebenjamin are coming for your husbands, she stole my sister’s husband as if that’s not enough she is sending her threats, that I won’t let it slide, kelvin I dey find una come that dubai nothing must happen to my sister,” he said.

Cubana Chief Priest also said Maria’s recent flaunting of dollars, Range Rover and wristwatch a few days before, was done to spite his sister, adding that his sister quit her marriage after discovering that her husband, Kelvin sponsored Maria’s entrance into the Big Brother Naija reality show and met Maria at her husband’s house in Dubai

However, trouble started when, the week before, Maria was seen in a video on her Instagram story flaunting wads of cash as she goes shopping, buying designers from Issey Miyake, Christain Dior, Givenchy etc. Some fans on social media had tagged a particular wristwatch on her hand as the supposedly lover’s wristwatch.

However, like Savage, Maria was unfazed. She was unbothered about the allegations and treated them with levity and, instead, chose to maintain silence. When Nigerian blogger, Stella Dimoko Korkus contacted her to get her response on the issue, she responded: “Hi, sorry, lt is well. Thanks for your concern.”

That was also the same way Savage behaved in the heat of her sex video going viral. In spite of the backlash against her, Savage took to Instagram to flaunt her Patek Phillippe wristwatch that reportedly cost her N79million. Indeed, only the duo have the capacity to display such nonchalance, such savagery, such insouciance, even in the heat of scandal.