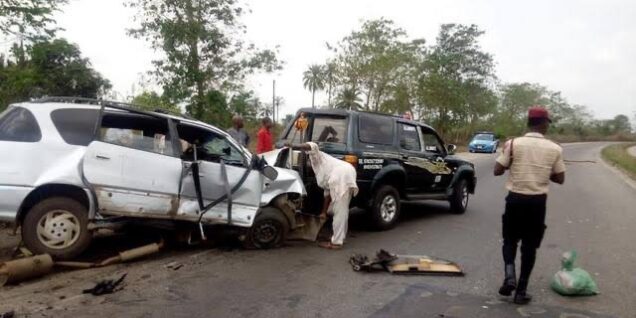 Three persons were confirmed dead on Saturday in an accident involving a DAF truck, a Toyota Sienna and a Toyota Camry at Olowotedo axis outbound Lagos along the Lagos-Ibadan expressway.

Akinbiyi noted that the accident occurred at 4:07pm and was caused by the Toyota Camry car with no registration number.

He explained that the car wrongfully overtook the truck, loaded with empty crates, and this caused the truck driver to lose control and rammed into the Toyota Sienna in front.

The TRACE spokesman said that nine people were involved in the accident, adding that two people were injured while three persons died on the spot.

“The Toyota Camry car which caused the accident escaped,” he said.

Akinbiyi said that both the Sienna marked SHS 31 XH and the truck with registration number AKD 361 XY had been taken to Redeemed Police Station for further investigation on the unfortunate crash.

He stated that the deceased were deposited at a private morgue in Sagamu while the injured were taken to Famobis hospital in lotto, Mowe.

Akinbiyi commiserated with the families of the deceased while admonishing drivers to avoid reckless and dangerous overtaking.