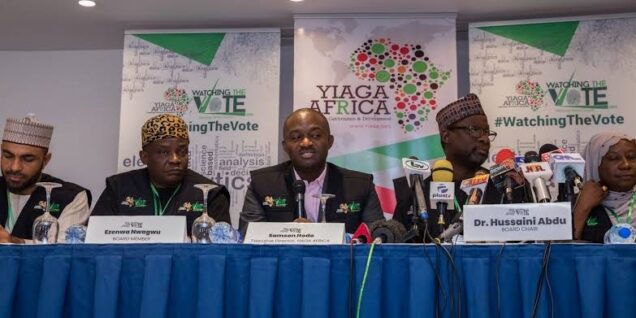 Yiaga Africa, an independent election observer group, has said late arrival of electoral officials, materials, accreditation and voting, denied many voters the right to vote in the Anambra governorship election.

Yiaga Africa said this in an interim statement on the 2021 Anambra Gubernatorial Election held on Saturday.

The group said the challenge of inability of the Bimodal Voters Accreditation System (BVA) or card readers to verify voters timely also resulted to many voters not casting their votes in good time.

The group said it based its report on verified information received from 229 of 248 sampled polling units using the Watching the Vote (WTV) method.

It said that on the average, two polling officials were deployed to those polling units where the Independent National Electoral Commission (INEC) officials and materials arrived.

“Yiaga Africa WTV observed the deployment of the BVAS to the polling units. We received reports of the BVAS failure to authenticate voters’ fingerprints and photos even where voter details were confirmed on the voter register.

“Yiaga Africa is concerned that the non-opening of these polling stations disenfranchises registered voters in those polling units,” it stated.

The observer group blamed the poor deployment of man and materials to voting centres on lack of effective collaboration between INEC and transport companies as well as lack of contingency plans to take care of any failure.

“Yiaga Africa anticipated these challenges based on our pre-election observation, hence the call in our pre-election statement urging INEC to make contingency plans in situations where respective transport unions/companies reneged on their contractual obligation to deploy.

“These incidents could potentially undermine the integrity of the election if not addressed.

“Yiaga Africa commends the people of Anambra for the enthusiasm and resilience demonstrated with the turnout for the elections.

“INEC owes the people of Anambra a duty to take necessary steps to ensure that registered voters are not disenfranchised on the basis of technological failures or logistics challenges.

“Yiaga Africa urges INEC to provide periodic updates on the status of elections in polling units where the BVAS consistently malfunctioned or where elections did not hold.

”Yiaga Africa lauds the professionalism exhibited by security agencies since the commencement of polls,” they said.

The group called on security agencies to respect human rights and maintain non-partisan dispositions throughout the results to investigate reports of hijack of election materials and prosecute the culprits.

“Yiaga Africa would provide updates as the process progresses,” warning that it would expose irregularities especially when the results doesn’t tally with observations.

“Yiaga Africa commends the good people of Anambra State for their peaceful conduct during the voting process and pleads that them to remain patient and peaceful through the voting and counting process,” it stated.

Meanwhile, INEC has said that voting will continue on Sunday in areas where voting could not hold on Saturday.