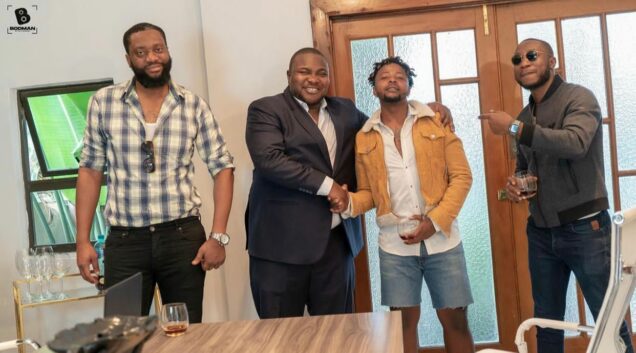 According to him, the South Africa-based record label is also currently in talks with one of the finalists of the 2019 Big Brother Nigeria reality show, Omashola Oburoh, to join the label as well.

Rethabile is a musician, rapper, and songwriter, born in the Free State (Bethlehem), but grew up in Maseru (Lesotho) where he spent most of his young life oblivious to his musical talents.

He later moved to Rustenburg (North-West Province) where he was exposed to some of hip hop’s finest. Building from this exposure he wrote his first verse on his way back home from primary school.

Taken from what he just realized was within him, Rethabile Thejane known as Rethabile made a decision about his future not many young man would make, he decided to spend his life making music.

A brief description about Rethabile and the music he creates is versatile, it’s a blend of vernacular and slang English.

Rethabile has established himself as a certified hit-maker, after working with the likes of Tuks Senganga, Ruggedman, Pdot O, Ginger Trill and Magnito just to mention a few.

Tirelessly working day and night on building his brand of music. “Music is my life,” Rethabile says.

Bodman Entertainment is a well-established label set up purposely to scout for new and fresh talents and catapult them into the limelight.

Founded by an entertainment personality, Olabode Tawose also known as Bodman with an aptitude for leadership and a passion for providing excellent service in each and every one of his business endeavours, the company has continued to grow and become the preferred hub for entertainment.

Influenced by Don Jazzy, Olamide, and other aces in the industry, Bodman has the ability to spot talent that brings about a new type of vibe and groom them well. With the right team, networking, knocking on doors of every potential opportunity and sometimes taking risks by investing a lot of money, Bodman and his company are waxing stronger.

Bodman’s major project, titled Nigerian-South African featured was born out of his idea to bring the two countries together on one album through the collaboration of Nigerian and South African artistes.

Aside from music, Bodman has other projects in the pipelines under his company. Just to mention a few, I am also working on launching my film production company called Bodman & Sons Films Production, making short films, and eventually growing into bigger movie projects. and an annual club tour.