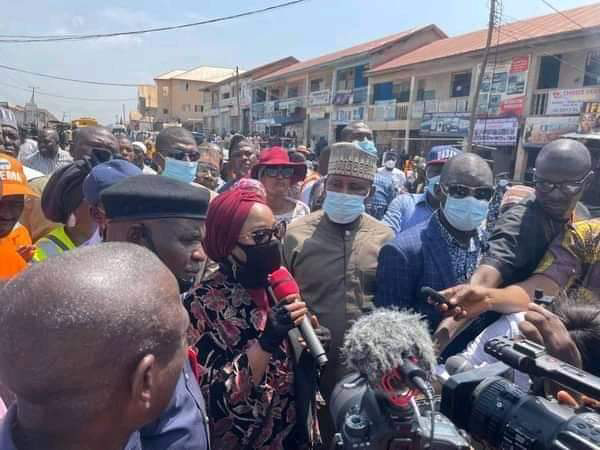 The Federal Capital Territory Minister of State, Dr Ramatu Aliyu had expressed her sympathies to victims of the Kubwa market fire incident that claimed no fewer than six lives.

Aliyu expressed her sympaties, on Saturday, when she visited the scene alongside the FCT Director of Fire Services, Malam Sani Sa’idu, and other top management staff of the FCT Emergency Management Agency.

The minister warned traders not to sell highly inflammable materials in undesignated areas, in line with global best practice.

Aliyu, who commended the FCT Fire Service and other critical stakeholders for their proactive steps, however, lamented the high casualty recorded from the incident.

She expressed concern over frequent fire outbreaks in major markets across the territory, pledging that the FCT Administration would study how best to assist the victims.

The minister revealed that the FCT Department of Development Control would be directed to remove all shanties along the road corridors to pave way for emergency operations.

“First, I want to, on behalf of the FCT Administration and President Muhammadu Buhari, sympathise with the families of those who lost their beloved ones in this unfortunate fire outbreak.

” However, it is regrettable that six persons have been confirmed dead despite the proactive steps taken by the FCT Fire Service.

“I want to appeal to our residents to be law abiding when government makes policy statements on certain issues.

” Before now, government has warned residents not to sell kerosene, diesel or any inflammable chemicals in  unauthorised areas.

Abuja is a planned city and there are designated areas marked out for such trade.

“I will direct the Department of Development Control to come here and remove all the shanties that blocked the access road leading to the market.

” I was told that fire fighters found it difficult to even access here due to illegal structures and shanties.

All these will be removed by next week and I want you to show understanding in carrying out this exercise,” Aliyu said.

Conducting the minister round the scene, the Director, FCT Fire Service, Malam Sani Sa’idu, told the minister that the cause of the fire outbreak could not be immediately established, but that it reportedly started from a shop that was selling kerosene.

Sa’idu also informed the minister that as soon as the service received the distressed call from residents of the area, his personnel were deployed from the nearby Maitama Fire Outpost to Kubwa for rescue operation.

According to him, if not for the quick intervention of the fire service, the casualties could have been more than the number recorded.