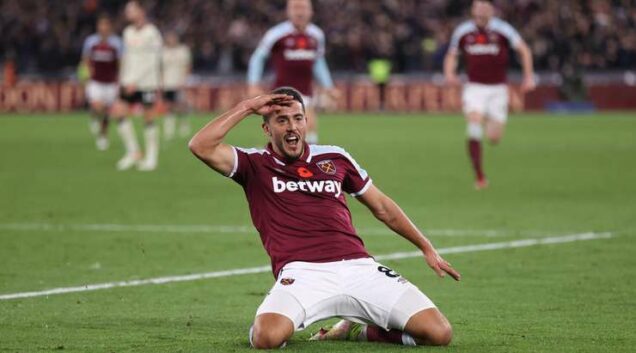 With the win, West Ham have overtaken Liverpool, moving to third place on EPL table.

Liverpool needed to win the match to overtake Manchester City in second place but the Reds faltered.

Liverpool’s goal keeper, Allison gifted West Ham with an own-goal in just four minutes of the first half.

The visitors equalised on 41 minutes through Trent Alexander-Arnold, who smashed the ball from the resulting free kick and it sailed into the top right corner.

The Hammers were in front again on 67 minutes through Pablo Fornals.

Jarrod Bowen set up Pablo Fornals for a shot on the edge of the box. He doesn’t hit the cleanest of shots, but the ball somehow found its way into the bottom right corner.

Kurt Zouma gave West Ham 3-1 lead on 74 minutes as he outjumped the defenders inside the six-yard box to meet a corner kick and scored with a header into the middle of the goal.

Divock Origi reduced the tally with a super strike on 83 minutes.

The ball had rebounded and arrived at the feet of Divock Origi just outside the box.

He fired a great shot into the bottom right corner. His attempt was beyond the reach of Lukasz Fabianski, as the ball went in.

The Hammers held on to win an important match.