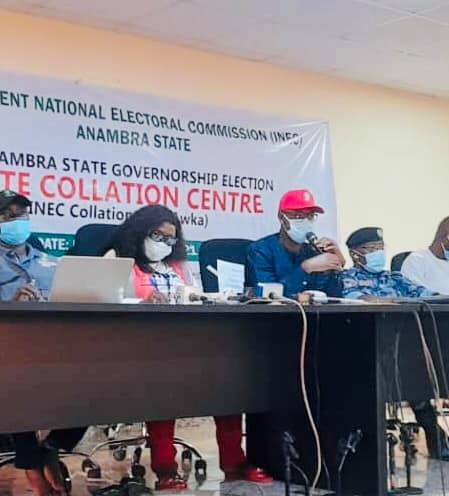 Executive Director, Yiaga Africa, Samson Itodo, made this known at a news conference on the preliminary statement on the Anambra election.

Itodo said that Yiaga Africa deployed 500 observers and 27 mobile observers to monitor the election adding that INEC had so far released results for 20 Local Government Areas (LGAs),remaining Ihiala LGA that was yet to hold.

He said that Yiaga Africa, through the Watching The Vote citizens movement, deployed the Parallel Vote Tabulation (PVT) methodology to verify the official governorship results as announced by INEC.

The News Agency of Nigeria (NAN) reports that the PVT is an advanced election observation methodology that employs well-established statistical principles and sophisticated information technologies in elections.

This is in providing timely and accurate information on the conduct of accreditation, voting and counting, and it independently verifies the official governorship results as announced by the INEC.

“The release of these figures speaks only to the accuracy of the tabulation process for votes cast on Nov. 6 2021 and not the overall credibility of the Anambra gubernatorial election.

“As noted, the election is not yet over. Yiaga Africa will continue observing the voting and counting processes as well as the results announcement for Ihiala by deploying its observers to the sampled polling units of the LGA on Tuesday.’’

According to Itodo, of sampled polling units that opened Saturday, Yiaga Africa received reports from 96 per cent from its field observers.

He said that based on those reports, Yiaga Africa’s statistical analysis showed that for the votes cast ,All Progressives Congress (APC) should receive between 16.6 per cent and 21.1 per cent of the vote.

Itodo said that it was important to highlight the counting process at polling units was transparent and included representatives from the four political parties that received the most votes.

He said that INEC’s turnout and rejected ballots for the 20 LGA released were also consistent with Yiaga Africa WTV PVT estimates.

He urged INEC to work on its logistics to curb further hitches and technological failure at elections as well as distribute voters evenly at polling units.

This, he said, was to decongest the overcrowded ones while adding to other units with scanty voters to balance adding that this was because the newly created polling units had few voters while some units were over crowded .

Mr Ezenwa Nwagwu, Board Member ,Yiaga Africa, said that the group noted some observations having monitored the election.

Nwagwu said that in spite of the establishment of Super Registration Area Centers (RACs) close to the polling units to avert logistical hiccups, late deployment of election materials and personnel delayed the opening of polling units.

He said that based on verified reports from Yiaga Africa observers, 21 per cent of polling units failed to open by 12noon adding that this might disenfranchise voters.

He said that the delays were occasioned by poor logistics management and transportation challenges as per INEC’s announcement.

He said that in five per cent of polling units, the BVAS malfunctioned but was not fixed or replaced.

He added that INEC’s framework for adopting new electoral technologies, as the BVAS, though a valuable tool for electoral integrity, fell short of expectations.

He said Yiaga Africa implored INEC and security agencies to ensure safety for women voters and for INEC to ensure gender parity in its deployment of officials in electoral processes.

Director of Programmes ,Yiaga Africa ,Cynthia Mbamalu, said that to enhance the transparency of the supplementary election, INEC should publish the total number of Permanent Voter Cards (PVC) collected in Ihiala LGA and inform the public on the status of uncollected PVCs.

Mbamalu also said that Yiaga Africa urged INEC to undertake an audit of the BVAS and ensure all the technological glitches with the device were resolved ahead of the supplementary elections to prevent delays and possible disenfranchisement of voters.

She added that INEC needed to sanction all its staff accused of complicity and conspiracy with political actors and security agents to falsify election.

She said that Yiaga Africa urged INEC to terminate its contractual relationship with road transport unions, especially those notorious for breach of contractual obligations.

Mbamalu said that in addition to termination, INEC should seek legal remedies against transporters who were liable for breach of contract.

She urged security agencies to maintain nonpartisan and professional conduct in the Nov 9, 2021 supplementary election and investigate all its personnel involved in misconduct.

She called on the National Assembly to without further delay conclude the amendment to the Electoral Act and transmit the electoral bill to the President for assent.(NAN)