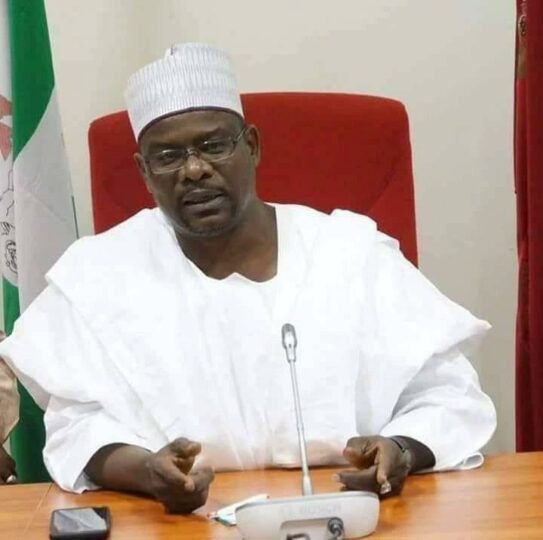 Senator Ali Ndume has called on President Muhammadu Buhari, to urgently sign or issue an Unexplained Wealth Order, as a way to strengthen the fight against corruption.

Ndume made the call on Saturday, in Ibadan while delivering the 2021 Distinguished Leadership Lecture Series, organised by the University of Ibadan.

The lecture, with the topic : ‘The Unexplained Wealth and the Fight Against Corruption in Nigeria’, was held at the Trenchard Hall of the university.

The Senator, who is the Chairman, Senate Standing Committee on Army, also urged President Buhari to prevail on the National Assembly to pass the Proceeds of Crime Bill in time “regardless of bickering on the management of the proceeds recovered”.

He said there was need to look at the incidence of corruption, “most especially, those occasioned by public officers who are in trust of public wealth.

“Our crusade against this monster (corruption) should start from politicians, top public servants, civil servants down to local governments’ staff.

“For the perpetrators, it is not difficult to identify the tendencies exhibited by these officers; acquiring landed property in and outside the country, having fat bank deposits, buying expensive cars, or marrying so many wives”, he said.

Ndume further said that the fight against corruption was a fight for the nation and must start from the top to the bottom.

“It changes our good culture, it breeds injustice and impunity, every citizen has a role to play.”

Speaking further on how to address the menace, Ndume said government must go a step further to protect the whistleblowers.

He said that the whistle blower policy must be revisited; stressing motivation for whistleblowers shouldn’t just be the reward, but patriotism.

According to him, the whistleblowers must be active at all levels inclusive of local areas, adding that the blowers must not be scared but be protected by law at whatever cost.

He called on relevant anti-corruption agencies such as Independent Corrupt Practices and other Related Offences Commission, Economic and Financial Crime Commission and Department of State Security to take whistle blowers seriously, carry out investigation on whistle blowing reports “however casual it may be”.

The lawmaker, however, said that whistleblower alleged to have lied should be taken to court.

He said that the Code of Conduct Bureau owed it a duty to request every public officer to make a declaration of asset periodically and should verify the claims periodically or when complaints are lodged.

The lawmaker also charged the National Orientation Agency (NOA) and other relevant agencies of government to embark on vigorous sensitisation against corruption.

Sen. Ndume used the opportunity of the event to announced the donation of N1million as scholarship to assist some indigent students of the institution

Earlier in his welcome remarks, Prof Kayode Adebowale, Vice Chancellor of the University of Ibadan, said that the institution was tackling corruption in an organic way.

According to him, nearly every undergraduate student in the University takes a course in Ethics, either as a compulsory general studies course or as a regular department-based course.

He said that the institution believed that exposure to the courses would go a long way in imbibing in the students the anti-corruption disposition.