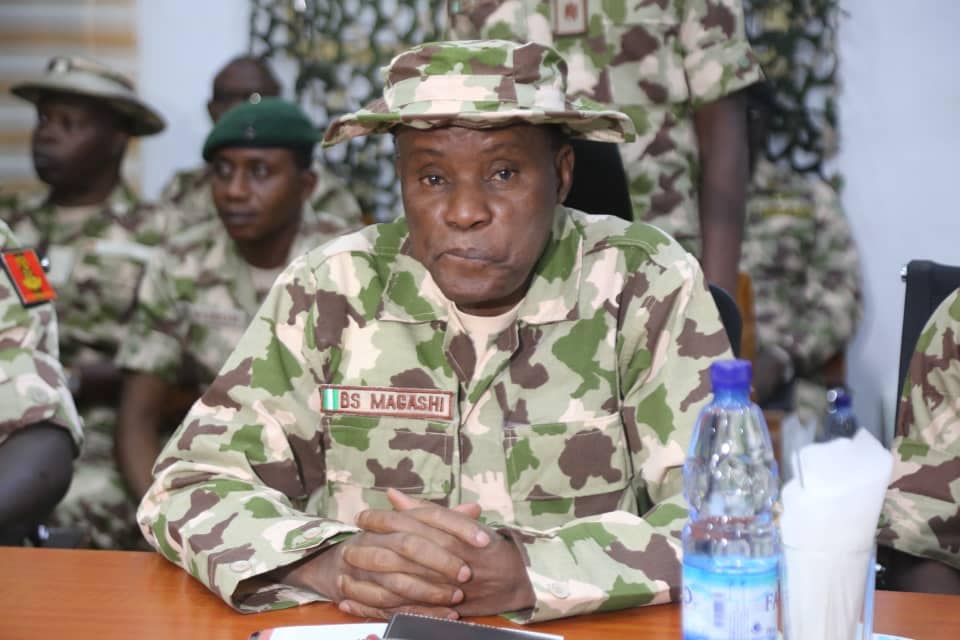 The Minister of Defence retired Maj.-Gen. Bashir Magashi said the prevalence of the various security threats in Nigeria has adversely affected food security thereby posing a new dimension of threats to the country.

Magashi stated this at the opening of a retreat for Defence Advisers/Attaches Conference, organised by the Defence Intelligence Agency (DIA) on Monday in Abuja.

The conference/retreat has the theme, ‘’Advancing Counterterrorism Efforts through Enhanced Inter-Agency Cooperation: A Whole of Government Approach”.

He said the attacks by Boko Haram Terrorists and Islamic State in West Africa Province (ISWAP) in the North East as well as banditry and herder/militia in the North West and Central had continued to pose serious security threats to Nigeria.

According to him, the littoral states in the South-South region are plagued with illegal oil bunkering, piracy and militancy while the South-East is challenged with secessionist activities of the Indigenous People of Biafra (IPOB).

He added that the South-West region is equally faced with secessionist inclination driven by ethnic agitators as well as occasional tension between herders and farmers.

“The threats currently facing Nigeria and understanding their socio-geographic context is pivotal for adapting appropriate and lasting counter-measures.

“Regrettably, the prevalence of these threats has continued to endanger not only national security and economic growth, but also food security.

“In particular, food security has been adversely affected with the attendant rise in the prices of food stuff across the country which portends a new dimension of threat.

“This makes it imperative for the various security agencies in the country to continue to collaborate to tackle these menaces in order to create an enabling atmosphere for economic activities to thrive and to attract Foreign Direct Investment.

“It also means that the security agencies must explore all avenues within their respective systems to come up with innovative ways of identifying and confronting the challenges facing us as a nation,” he said.

Magashi said that the Defence Advisers/Attachés system had crucial roles to play by forging understanding and cooperation with the security and defence architectures in their respective countries of accreditation.

He said the conference would provide participants with the opportunity to appraise the shared vision of stemming the tide of insecurity through the integrated efforts of all government entities, the objectives of the government approach.

He said the recent achievement of the military and security agencies who took the fight from all angles to the doorsteps of the adversaries leading to the surrender of over 14,000 terrorists, is reassuring.

Monguno, represented by his Principal General Staff Officer, Maj.-Gen. Abubakar Ndalolo said that Nigeria had been adopting both kinetic and non-kinetic approaches in dealing with security challenges, adding that both approaches had been yielding results.

He said that the government also laid emphasis on the integrated approach, which recognised the roles of ministries, departments and agencies as well as the entire society in “tackling our security challenges”.

According to him, this involves the participation of critical stakeholders from different sectors of the society, such as religious actors, youths, teachers, women, civil society, media, law enforcement as well as security and intelligence agencies.

The Chief of Defence Intelligence (CDI), Maj.-Gen. Samuel Adebayo said the conference is an annual event that affords DIA a medium to assiduously review the activities of all its defence sections.

Adebayo said the conference was also an avenue to identify new lessons and challenges, discuss modalities for overcoming such challenges as well as strategies for the future.

According to him, this conference comes at a time when the nation is facing unusual daunting security challenges characterised by a volatile, uncertain, complex and ambiguous environment.

“That is why the theme for this year’s Conference, “Advancing Counterterrorism Efforts through Enhanced Inter-Agency Cooperation: A Whole of Government Approach”, was carefully chosen.

“This theme will undoubtedly guide our deliberations and contributions to the current efforts of the Federal Government towards attaining an approach in our counter-terrorism strategy and create an atmosphere for sustainable national security and development.

“It is therefore in this regard that I urge the participants in this conference to address the issues squarely and deliberate with open minds to ensure that the objectives of the conference are achieved,” he said.

The CDI noted that the Nigerian armed forces had made tremendous progress in confronting the nation’s security challenges as evident from the massive surrendering of terrorists in the North East and intensified operations against bandits in the North West and North Central regions.

He said the fluid nature of the threats posed by the enemies had reinforced the need for collaborative efforts, be it government to government, within the security Services and even through foreign diplomats and Defence Attachés System (DAS).

According to him, the need for a continuous reappraisal of our strategies, operational tactics and methods of intelligence gathering and sharing in order to efficiently deal with our security challenges, is therefore paramount.

He said the forum would provide the opportunity to tap from the vast experiences of the participants.

The Chairman, National Drug Law Enforcement Agency (NDLEA), retired Brig.-Gen. Buba Marwa urged attachés to use their position to support the fight against drug abuse and trafficking in Nigeria.

Marwa said there is a strong connection between drugs and insecurity, saying that taking drugs out of the hands of peddlers would reduce the effects on security.

He said the recent seizure made by the agency revealed that large quantities of drugs used by criminals are finding their way into the country.