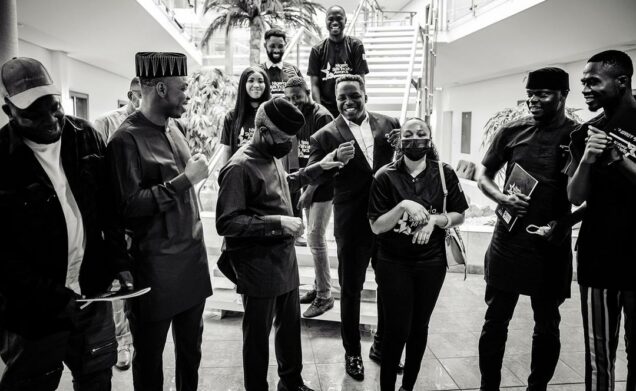 Osinbajo with his guests

A team of skit makers had on Wednesday paid a visit to the VP at the Presidential Villa, Abuja.

The delegation, which came under the aegis of the Nigeria Skits Industry Awards, was led by its promoter, Bimbo Daramola.

Reacting to the controversy that the visit by the comedians had courted in the past few days, the Convener of Osinbajo Support Movement, Badmus Olawale, in a statement, said some of the aggrieved comedians including Debo Adebayo, popularly known as Mr Macaroni, were pained that they were not part of the meeting, hence their mischiefs.

Olawale’s statement read, “These are comedians that makes us burst into laughter, they are a great part of the media space and that is well recognised and appreciated but for the records, they were not invited by the VP nor his office. Nobody in VPs office facilitated the meeting, they sought for the meeting, they wrote letters and did follow ups, and VP gave them audience as an association, not as individuals so who was present does not matter to VP but the representation of the association.

“Remember he is the Vice President of Nigeria and so he has the right to attend to which ever association he wishes, except criminals. So they should let the social media banter they cannot stand remain in their space and leave the VP out of their comics. Now they have shown they cannot receive 1% the Cyber bully people in Government gets everyday.

“As for Macaroni, he should stop playing to the gallery, we all know when he was begging Atiku for money in 2018 so he should bend down low and stop writing long epistle, VP never invited him nor any of them, their association wrote to see the VP, which is a good thing.

“Some of them were actually pained that they were not part of the meeting, hence the marabouts.

“They simply pushed for the meeting, they wanted to use VP as publicity for it and recognition of their association. VP has nothing to do with it or them.

“I thought they always motivate us never to apologise for what we feel is right? Now the victims know that leadership is not moimoi.

“Once again, keep VP out of your banter, he is an accommodating leader and he displayed that by receiving them despite their daily insults on him. Leadership is not for the weak.”

The convener further said that it was not true that the VP did not engage with youths, adding that he has been efficient in this regard, being a cheerleader of youths.

He cited some instances where Osinbajo had met with Nigerian youths in 2021 to include APC Youth Wing meeting at the State House on February 4, 2021; APC National Progressives Youth Conference at the ICC on June 21, 2021; virtual Interaction with Nigerian Fellows of the Mandela Washington Fellowship on October 20, 2021; 10th Anniversary Of AfriLabs Event, Awards And Dinner Night on October 27, 2021; and the National Youth Conference on November 1, 2021, to mention a few.