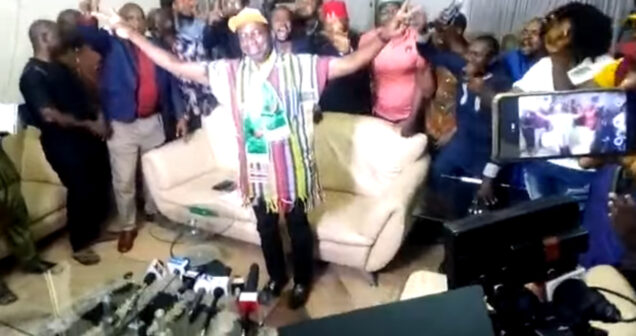 Prof. Charles Chukwuma Soludo, the governor-elect in Anambra State has dedicated his victory at the polls to three slain policemen in the state.

The policemen were killed back in March when Soludo was attacked by gunmen at a town hall meeting in his hometown in Isuofia in the Aguata Local Government Area of Anambra State.

Soludo dedicated the victory to them when he was delivering his speech after he was declared winner of the election by the Independent National Electoral Commission (INEC) on Wednesday morning.

Soludo described his victory as a reflection of the will of the people and promised to deliver the dividends of democracy to the people of the state.

“Let me say with utmost humility and gratitude to God, I accept the results of the 2021 Anambra Governorship Election as declared by INEC. And this reflects the supreme will of the Almighty God and an overwhelming sacred mandate of the people…This is a divine journey whose time has come.

“At this moment we must remember and must continue to remember all those who died during the course of this moment, especially the three policemen who were killed by unknown gunmen during our town hall meeting with youths in my ward. May God continue to grant their soul eternal rest,” he said.

The former governor of the Central Bank of Nigeria would be sworn-in to office March 2022 after the expiration of Governor Willie Obiano’s tenure.